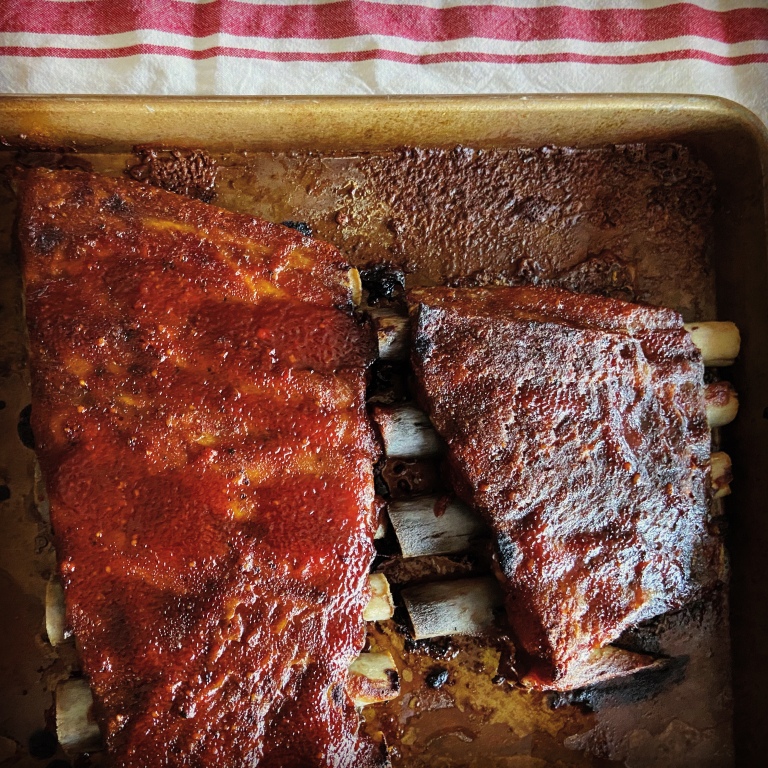 It was either an evil or genius happy coincidence that Max was plunked down into the empty cubicle next to mine when he was hired because we are always talking about food, food, and more food. He’s more than happy to share his recipes with me, which I love. Sometimes people are secretive about their recipes (which I find plain weird). The only time Max won’t share a recipe with me, in fact, is when he whipped up a dish on a whim and can’t quite remember the ingredients.

This morning Dad and I drove to Blue Kangaroo, a coffee shop off 13th, to try their coffee (the Cubano latte I had was amazing); and then on to New Seasons to buy some ribs. I’ve been waiting for Dad to get here so we could use the spicy barbecue sauce Max gave me.

I’ve never made ribs before. Growing up my mom used to make delicious Pork Spare Ribs. The last time I had home cooked ribs was back in Huntington Beach when my ex’s friends were living/staying with us. I won’t go into detail but it was a debacle. I’m not sure if it was the Wife’s cooking skills or the fact that when the men were grilling them they were drunk and, thus, not paying attention. Actually, now that I think of it, the Wife was drunk when she was baking the ribs, too. Regardless, the ribs were less than stellar. Tough to get off the bone. Tough to eat.

I was hoping that my adventures in cooking ribs would turn out better than the last rib experience I was privy to!  Given that I’m generally never drunk and I certainly never undertake cooking a meal while drunk, I figured I was already ahead of the game.

I found a very simple recipe and perfectly easy to follow directions at steamykitchen.com.

The only reason I give this recipe four apples instead of five is because I wasn’t thrilled with the barbecue sauce. Don’t get me wrong, the barbecue sauce in and of itself is great. However, it’s very thick and probably not the best choice for these ribs. Next time I’d love to try the sweet chili sauce, as recommended on steamykitchen.com.

I loved how simple this recipe was. I do believe that cutting the membrane off the bottom of the ribs was key. The meat fell off the bone. No tough or chewy ribs in sight. Can’t wait to try these again!

I must have used a store bought BBQ sauce in 2011. In updating this blog, I went with an easy homemade variety that had my dinner guests licking their plates. I’m not even a huge fan of BBQ sauce but realized I am when it’s homemade! I upped the apple rating to 5 apples this time because with the homemade BBQ sauce and the way the ribs literally just fell off the bone, they were some of the best damn ribs I had ever eaten.