I am usually a proponent of making everything by scratch though over the years I’ve picked up a short cut here and there. For example, I now use minced garlic from a jar. It’s just so much easier than peeling and mincing your own garlic. I still buy garlic bulbs, but I reserve using them for special occasions.

The night before Easter my friend Angie and I went to Trader Joe’s (after first stopping at Costco and then the liquor store to get rum for this recipe and peach vodka for peach bellinis) to get the last remaining items we would need on Easter, one of which was ladyfingers. They didn’t have them. I was surprised/not surprised because Trader Joe’s honestly doesn’t carry everything. Though when Angie asked, they said they carry them seasonally. This comment confounded us. When is ladyfinger season?

Whatever. I knew we could find them at a more mainstream grocery store so we went home and dropped off the groceries (because we bought ice cream) and then we drove a mile away to my local Vons. Which also did not have ladyfingers. We scoured the aisles because one time I was looking for Gulf Wax and went to the obvious place where it would be–near the canning supplies–but it was’t. I went up and down each aisle and couldn’t find it. After I’d bought it online at Amazon, I was back at Vons for something else and happened upon Gulf Wax in the most random and inappropriate spot ever. (I had a similar experience with French’s fried onions once but couldn’t find them. So I made my cousin Alison hunt everywhere for them on my behalf. She found them in some random brand name at Ralphs but also had to hunt down every aisle to find them.)

I didn’t flinch to move on to another grocery store because this downtown Vons is a little bit smaller than other Vons. So we moved on to Ralphs on Fourth Street. I should interject to say that all the while Angie is suggesting something we could use to substitute (Madeilines? Shortbread? Biscotti?) and I’m shooting them all down. When I make my mind up on something, I follow through. Know what I mean? I could not substitute some random cookie and was pretty sure some random cookie wouldn’t work anyway because of the delicate texture of the ladyfinger. And I wasn’t about to screw up Easter dessert!

At Ralphs on Fourth we struck out again. Here Angie suggested pound cake and … waffles. While any other time I think it would be fun to do a riff on tiramisu using pound cake or waffles, I was hellbent on making classic Tiramisu.

So we drove a few miles to the Ralphs on PCH because the Fourth Street Ralphs is also basically downtown and smaller than other stores. In comparison, the PCH Ralphs is huge. But… they also did not have ladyfingers. I should mention that in the bakery section we did see a ton of Pizzelle, which is an Italian waffle cookie traditionally served at Christmas. (I guess there’s no such thing as a Pizzelle season here. Hmph!)

As Angie is starting to throw out more ladyfinger alternatives, I’m laser-focused on finding ladyfingers. Then low and behold, I spot some! I triumphantly flash the smallest container of ladyfingers you can ever imagine in Angie’s face. (I thought to myself… I’ll need two to three of these packages for the recipe at $4 a pop — yikes!) Then as I take a more discerning glance I realize they are not ladyfingers at all. They may be called ladyfingers but they are not cookies. What I have before me is sponge cake in a similar-ish shape as ladyfingers (but too wide and stubby, really). My hopes are dashed. I’m defeated.

What are you going to do? Angie asks. I know at this point she’s hoping I will buy pound cake because I did read you can use pound cake as a sub and I had confirmed this for her. She triumphantly notes she suggested pound cake an hour ago. I acknowledge I remember she suggested it as one of the 27 substitutes she threw at me. But honestly you have to slice the pound cake and dry it out before soaking it in the espresso mixture. That sounds like a lot of work and potentially like you could screw it up and really, dammit, I just want classic Tiramisu.

So I announce I’m making my own ladyfingers, I’m sure much to Angie’s dismay. She, at this point, most likely thinks I’m a crazy woman because we’ve been driving around town for almost two hours looking for ladyfingers which is actually impeding us from being able to prepare any of the dishes we will need the next day for Easter. But I’ve found a recipe online that says it only takes like 35 minutes total to make ladyfingers, and I have all the ingredients so it feels pretty much like fate at this point. I think Angie is still trying to sell pound cake or some other substitute.

We leave our fourth grocery store ladyfinger-less and I ignore that my GPS is telling me to take PCH home and decide we are instead driving down 2nd/Ocean because it’s prettier even at 9 pm. And as soon as we get back in the car and take off, I am wildly pulling off PCH because I spot Gelson’s, a boutique grocery store (think Whole Foods on a way smaller scale) and I’m convinced Gelson’s will have ladyfingers because… well I have blind faith and five times’ a charm. Right?

So I eagerly drag Angie into Gelson’s (seriously she must hate me at this point but she’s too good of a friend to voice that) and we search the cookie aisle and they have so! many! specialty! cookies! but no ladyfingers. Like seriously they had a crazy variety of biscotti, which we kept glancing at thinking they might be ladyfingers, and other random specialty cookies we had not seen at Trader Joe’s, Vons or Ralphs x2 but no ladyfingers.

I am mainly annoyed at this point because seriously what the hell? Why does no one sell ladyfingers?? We drive home and I’m in a mood. Angie makes pizza for dinner (we seriously have not eaten since breakfast because I was too busy taking us on a wild goose chase for ladyfingers) while I start the ladyfingers. I decide to switch to a more complicated recipe because the original one I looked at seems suspect at second glance. For the new ladyfinger recipe you have to beat eggs, sugar and something else – vanilla maybe? over boiling water until it reaches 160 degrees and then whip! whip! whip! the mixture until it forms soft peaks.

I honestly hate soft peaks. I can never get them right. I wish every liquid that needs whipping you whipped into hard peaks because I generally have that one down pat. So this part takes forever and then folding the flour into the mixture takes forever (per usual) and then piping them onto the pan takes forever and then about an hour or so after I started the recipe I produce flat looking ladyfinger-esque cookies in all sorts of lengths and widths. Dammit! 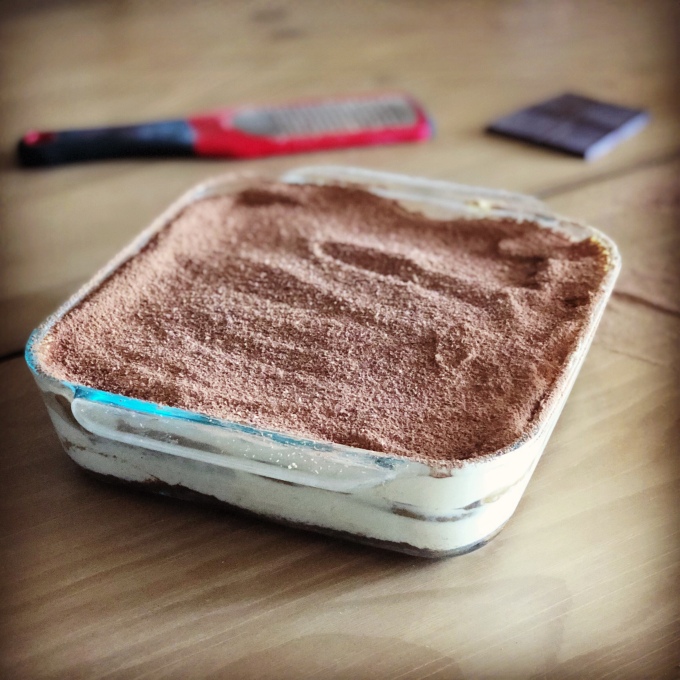 Must prevail! We’ve come this far, we are going! to! finish! All the while Angie is eager to dip the ladyfingers in the concoction she made of espresso and espresso liqueur. We opted not to use rum because they didn’t have any tiny bottles of dark rum at the liquor store though he tried to sell me Bacardi gold as a substitute. (Good thing I have years of bartending experience under my belt and know that gold rum is not the same as dark rum!) We have to wait to dip the ladyfingers until they cool completely.

I love tiramisu but I fear making it. That fear is not unfounded. It comes from the one time I tried to make Limoncello Tiramisu and the total flop/failure that occurred. We soaked the store-bought ladyfingers in Limoncello waaaaaay too long and they became super soggy and then the entire dessert felt like you were getting drunk by eating it. Incidentally, Limoncello is a very strong liqueur.

I relay this story to Angie. So by the time we are actually ready to dunk the ladyfingers, I have scared the hell out of Angie. She is afraid to make them too soggy. So I monitor her dunking and tell her when I think it’s good or needs more and she neatly places them on top of the 8×8-inch pan we had ready with the perfect sprinkle of cocoa powder on the bottom, courtesy of Angie.

We do two layers of ladyfingers followed by the custardy mixture, and final layer of cocoa powder on top the second custardy layer and call it a night. (This is a departure from The Tucci Cookbook.) We had to get this done the night before because it needs to  chill for hours and hours. It’s about midnight.

Easter evening after we have blown through four other courses of Italian delights I bring out the Easter Bread and the Tiramisu. I am a bit nervous for the Tiramisu because my homemade ladyfingers sucked and I’m still shaken from the Limoncello incident. I am so afraid our ladyfingers got too soggy even though, let’s face it, we barely allowed them to touch the espresso mixture.

After all the sweat and tears and swearing and hours we poured into making this Tiramisu, it is a! success! It received so many compliments from my guests who I let dig in first. But the real test is when I try it because, after all, I’m Le Food Snob. When I bite in I am happy to learn they weren’t all kindly lying to me. It’s pretty damn amazing.

And that’s the story of The Tucci Tiramisu. 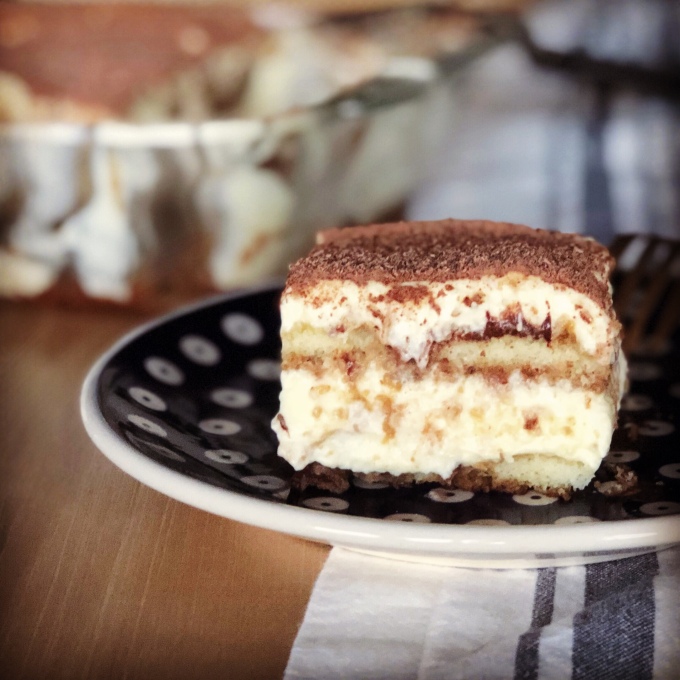 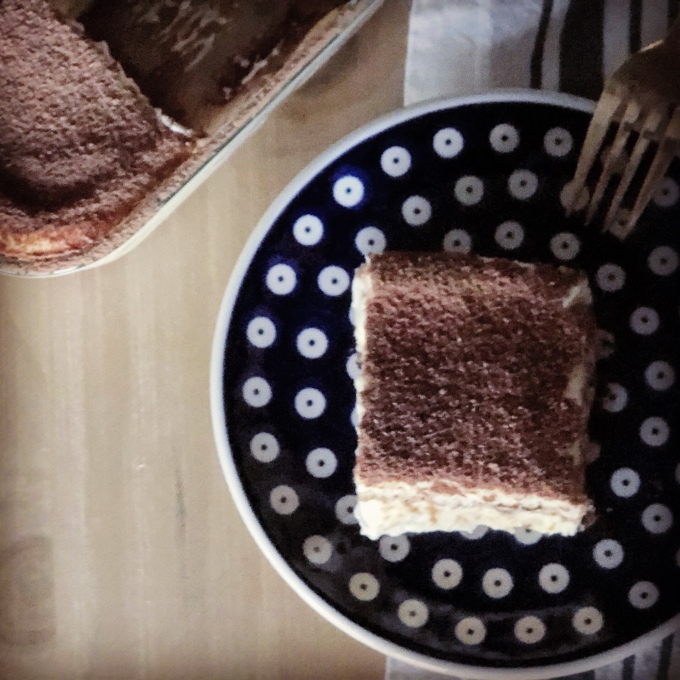