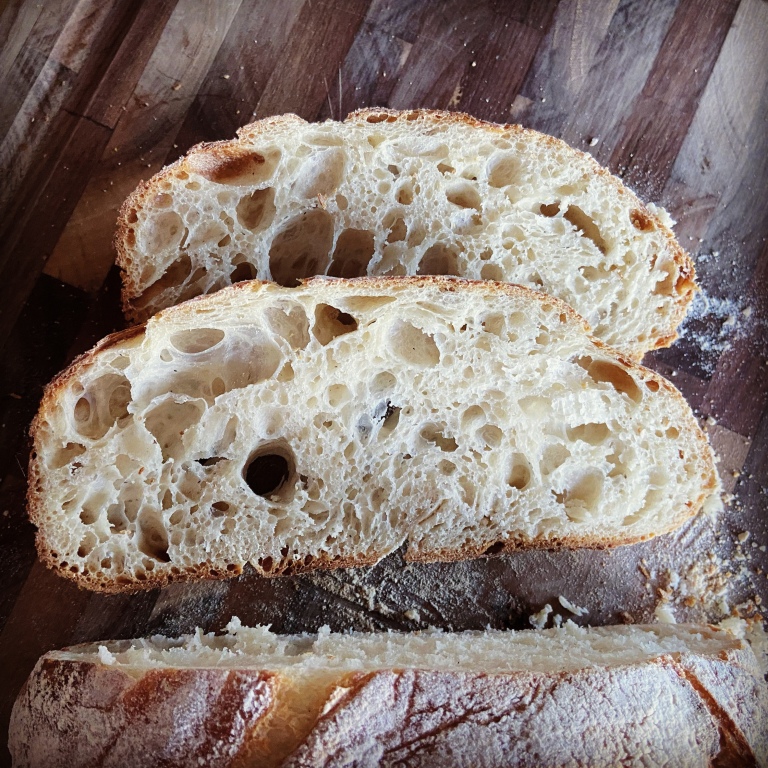 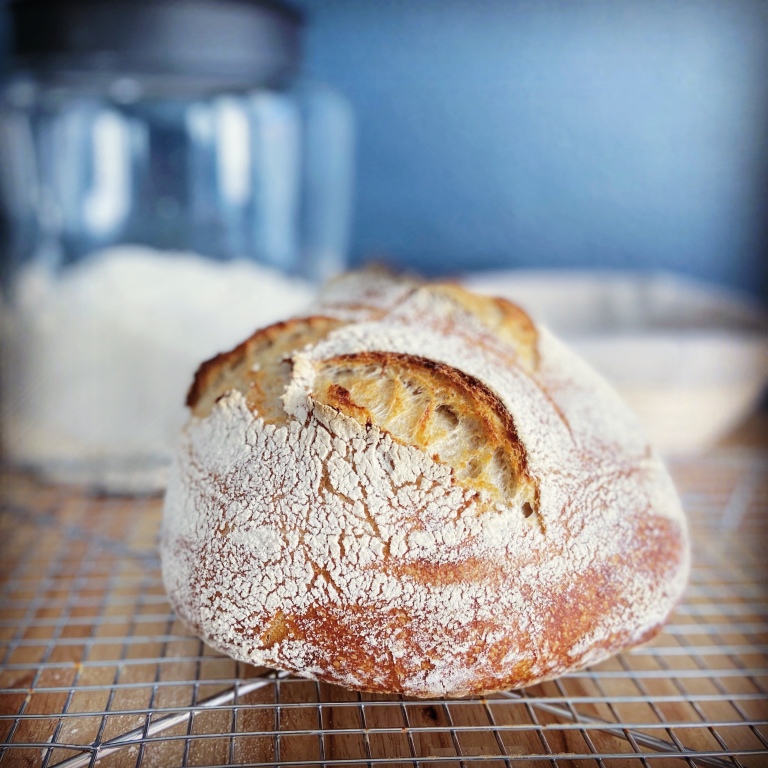 While I’m not gluten intolerant that I’m aware, a doctor recently advised me to remove gluten from my diet for the time being. Gluten is thought to cause and/or worsen inflammation and I’ve been diagnosed with severe inflammation (amongst other things). This is precisely why I wanted to try fermented sourdough bread though I had really no idea what it was.

I found an incredibly complicated recipe for Fermented Sourdough bread at Deliciously Organic that I decided I wanted to loosely follow for my first venture into fermented breads. I say loosely because there were just certain things I couldn’t do. The recipe called for organic flour, both all-purpose and whole wheat. The only thing I have right now is copious amounts of non-organic all-purpose flour and I wasn’t about to add more flour to my already bursting cupboard space.

Also, I always have starter/Levain in my fridge that I feed weekly. I had just fed it the other day so instead of making my own Levain using a starter, I went straight to the second step and used my mixture as the Levain in the recipe.

Since then I’ve made the recipe several more times following it to a T with one exception: I leave the loaves of dough in the fridge for several days (instead of 36 hours) to get a tangier sourdough.

Despite the fact that this recipe appears to be super complicated, I’ve introduced it to my neighbor Cara with much success and Sis with more muted success. It was easy to convince Cara to try the recipe because I gifted her family a loaf of bread and they went gaga over it. She found the recipe daunting, but with some convincing and after I supplied her with a scale and dutch oven, she was ready to give it a try. She had always wanted to make her own bread anyway.

Sis was harder to convince. During a long weekend in Portland I explained to her that I wanted to make a new bread recipe. She opted out of participating when I explained the process but said I could feel free go at it in her kitchen. When she bit into the first loaf I made, she liked it a lot. I asked her if it was good enough to try the complicated recipe on her own and she wouldn’t commit. Several days later when I was back in Long Beach and literally talking on the phone with Cara about the bread (as she embarked on her second time making it), a text came in from Sis saying she had made the second loaf of bread, which had swayed her to want to try the complicated recipe on her own.

One loaf of bread takes at least 3 days of prep with days one and three being relatively passive. On day 2 you do the most work. You need to have about four hours of time to give to mixing and stretching the dough and letting it sit, you also need 12 hours of letting it sit in the fridge. On day 3 it’s in the fridge for 24 hours to ferment. After that you can make the loaves of bread or wait until you’re ready to have a fresh loaf. Right now, as I write this, I have enough dough in my house to make 4 loaves of bread whenever I need one. Trust me that a loaf of bread is easy to eat, especially if you live with others. It’s also an impressive gift to give. It tastes like artisan bread you would buy at a fancy bakery and probably $5 to $8 for a loaf! 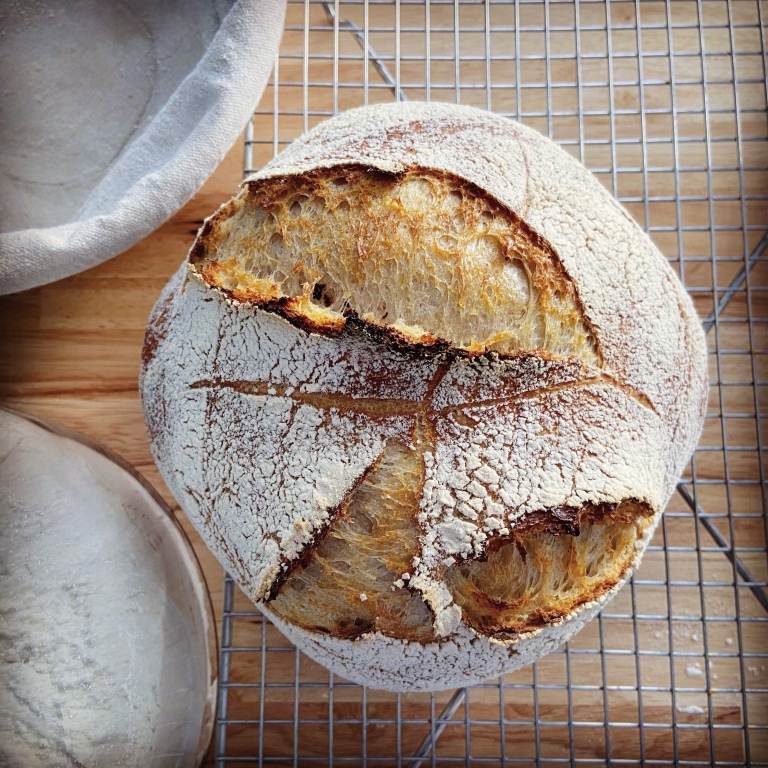 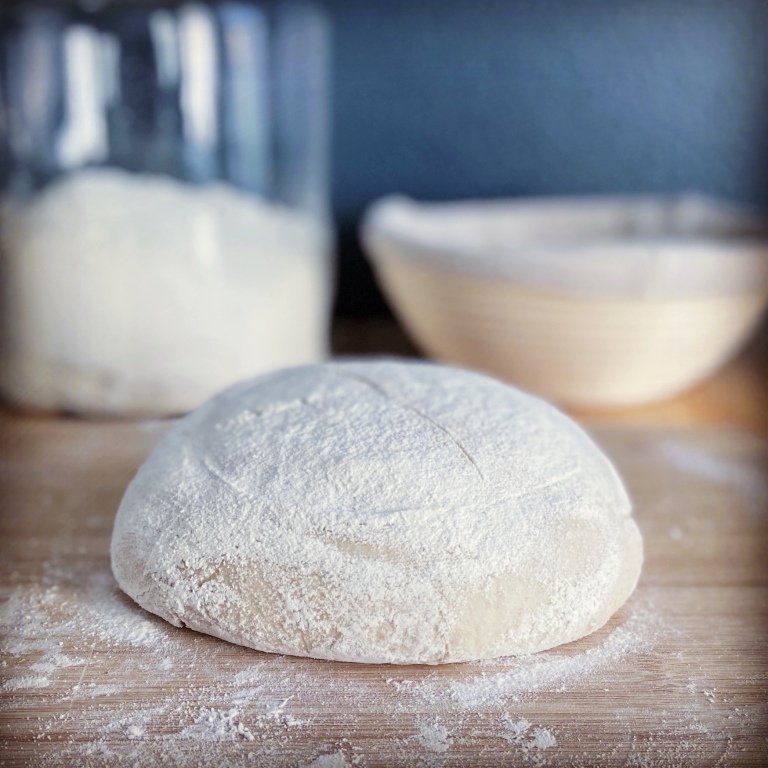 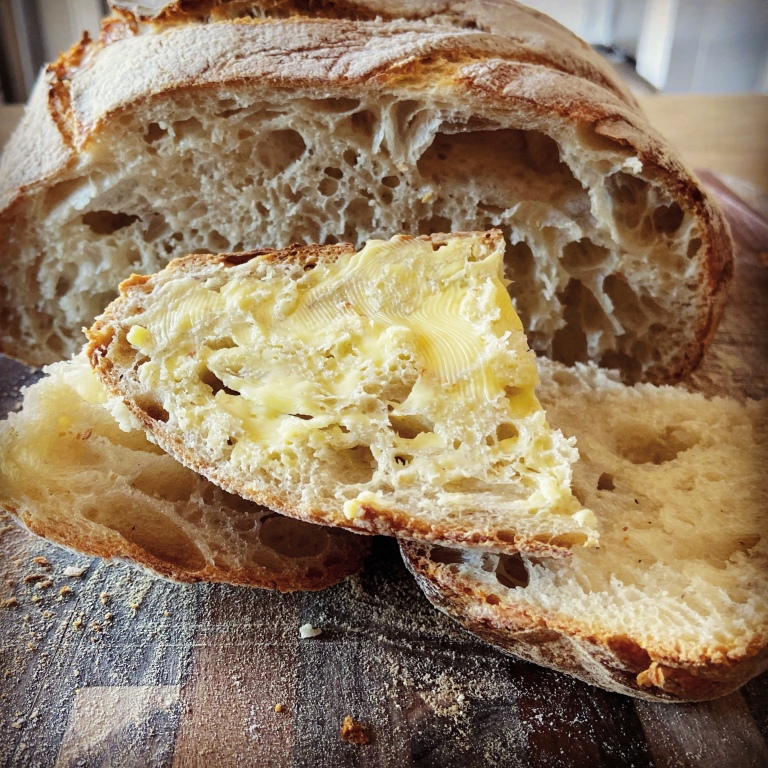 One Reply to “Fermented Sourdough Bread”