I may not follow recipes to a T, but I like to have some idea of how to cook something when I set out on trying something new. When Dad said he wanted rack of lamb, leg of lamb, or some kind of lamb for Christmas, I decided I needed some direction as to how we could cook said lamb. I found a recipe for a marinade and method for roasting at simplyrecipes.com, one of my favorite food blogs. 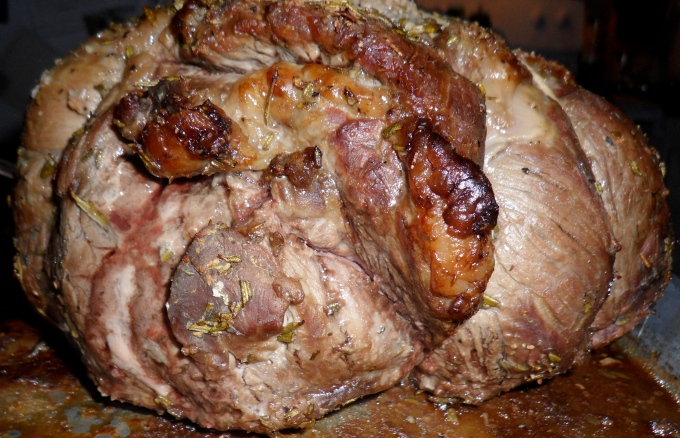 Note that the method of cooking directly on the oven rack will mimic a convection oven and the cooking time/oven temp needed will be less than you would need if you cooked the roast on a rack in a roasting pan. A thicker roast may take longer than expected.

Remove from the oven anywhere from 130°F to 135°F for medium rare. Lamb should never be cooked until well done or it will be too dry. Let stand for 15-20 minutes before carving. Cut away the kitchen string and slice with a sharp carving knife, 1/2 inch thick slices, against the grain of the meat.

For my first ever lamb-roast (or roast of any kind, for that matter), I lucked out. It turned out perfectly. Especially considering I was cooking a side dish along with the roast. Before I started the meal, I was a bit anxious fretting over how I could cook the entire meal and time it so each dish could be eaten hot and at the same time. The kitchen is one place where I’m not able to multi-task all that well.

I will say this: I found the method of cooking a little bit tricky. I had trouble moving the roast around in the oven (when adding the side dish) and eventually when taking it out. This is most likely because I don’t have one of those big carving forks. I think it would have been easier to handle if I hadn’t been using a regular dinner fork and a spatula. It took both me and my dad to wriggle the roast off the rack and onto the pan. There was also an incident with some foil on the bottom of the oven and an almost fire when the roast began to drip. But we’ll just glaze over that part of the story.

We couldn’t locate a meat thermometer, though Sis is convinced she has one somewhere, so I decided to just wing it and follow the recommended roasting time. The roast turned out medium-rare at the ends and a bit too rare in the middle. But we reasoned since we’ll be eating lamb leftovers all week, the middle will get cooked eventually. My dad was thrilled that the roast didn’t taste too lamb-y. We’re not sure if this was because of the marinade or because he bought a great piece of meat from Zuppan’s. At either rate, Dad had never had lamb that was marinated and he really enjoyed the flavoring. All and all, the roast (as well as the entire meal) was a huge hit. 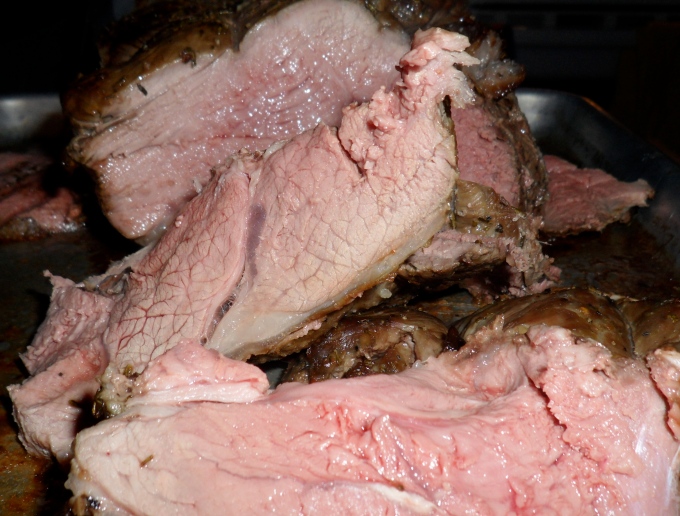