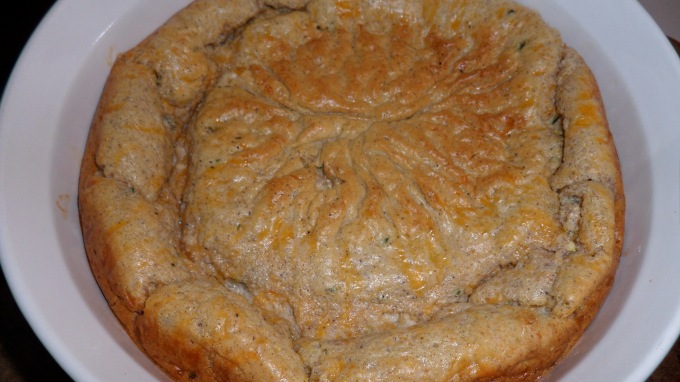 In case (like I was) you’re under the illusion that Spoon Bread is actual bread, let me shatter that illusion for you. It’s not. It’s more like a soufflé. In fact, there’s no flour in it all and it contains just a pinch of cornmeal. A pinch! Despite knowing these things going into making this dish, I still thought it would actually taste like bread. Really you shouldn’t have the name bread in a dish if it’s not going to taste like bread.

Much like dessert breads, I found I had to bake this longer than recommended. Maybe it’s my oven?! The ‘bread’ was a little jiggly after 45 minutes (which was the low-end of what’s recommended in the original recipe) so I continued to bake. I’m pretty sure I baked this for either 55 or 60 minutes.

Like any egg dish, this bread/soufflé puffs up when you’re baking and then deflates when it cools.

With four whole jalapeño peppers in this dish, it was pretty spicy. Great flavor, but I couldn’t get over the texture. I kept thinking it should feel a bit more substantial. You know. Like actual bread.