It almost seems impossible that I’ve never before made meatloaf, but no – it’s not. It’s true. The lasting impression I have of meatloaf is the kind my mom made while I was growing up – I’m sure it’s the same kind every mom’s made – with a layer of ketchup on top. I’m somewhat odd in that I can’t stand ketchup. (Unless eaten with … of all things … fish sticks or chicken nuggets.)

This meatloaf is not your mother’s meatloaf. I knew I wanted to try this recipe when I realized it was a meatloaf sans ketchup. Plus the blood drive is coming up at work. In order to not get rejected again (low blood iron almost every time!), I need to start pounding back the red meat. I think a three-pound meatloaf will do the trick!

I searched high and low (well, within a five-mile radius anyway) for ground veal. I couldn’t find it at any grocery store near my house; though I did find ground buffalo at a Safeway, which surprised me.

I suppose I could have stopped at a butcher shop and found some there, but almost three years ago my ex-BF’s best friend made us meatloaf (for my ex-BF’s 40th birthday, I believe) made with veal. I gotta say … I wasn’t a fan of it. I don’t know if it was the veal or the fact that the loaf was wrapped in bacon that wasn’t all that cooked by the time the loaf came out of the oven. Either way, I wasn’t a fan of the dish so I wasn’t too disappointed to not find ground veal.

I used two pounds of the fattiest meat they have at Trader Joe’s (not because I like fattier meat but because I’m cheap – it’s less expensive) and pound of ground pork (which was actually very hard to track and rather expensive).

Also, I couldn’t find fresh chives to save my life. So instead of using fresh herbs I used dried (of the same amount – though I’m pretty sure you’re supposed to use less when using dried).

I was overly pleased with this meatloaf when it was finally done cooking. It took way longer than the suggested time, but I think this was because I was also baking potatoes at the same time. I would definitely make this meatloaf again. (And again. And again.) I love the flavor of the herbs and the Garlic Sauce that accompanies it. I also love that it’s sans ketchup!

After realizing how much drippings were in the pan, I opted to make some gravy. I knew the half-cup of garlic sauce the recipe yielded would not stretch across the three-pound meatloaf. Plus I figured my coworkers, who will be helping me finish off this loaf, would be able to top their meatloaf with their choice of either Garlic Sauce or gravy. Both equally appealing. 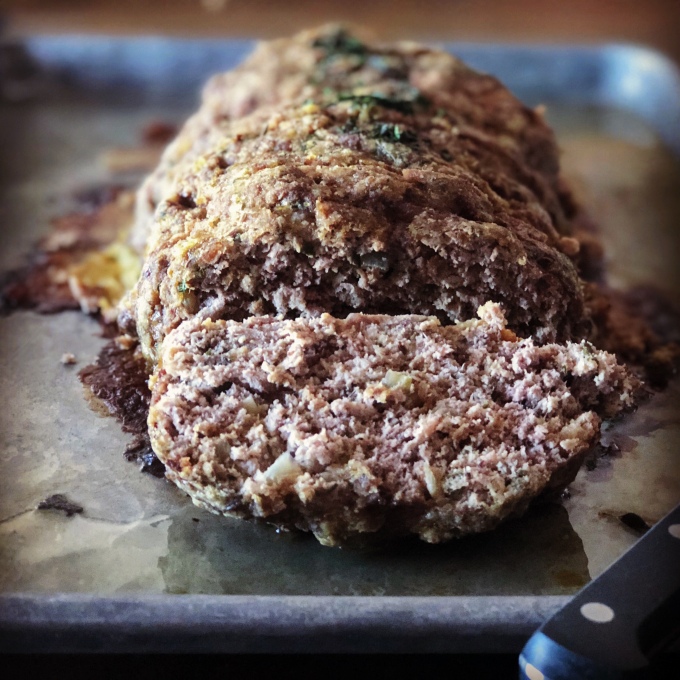