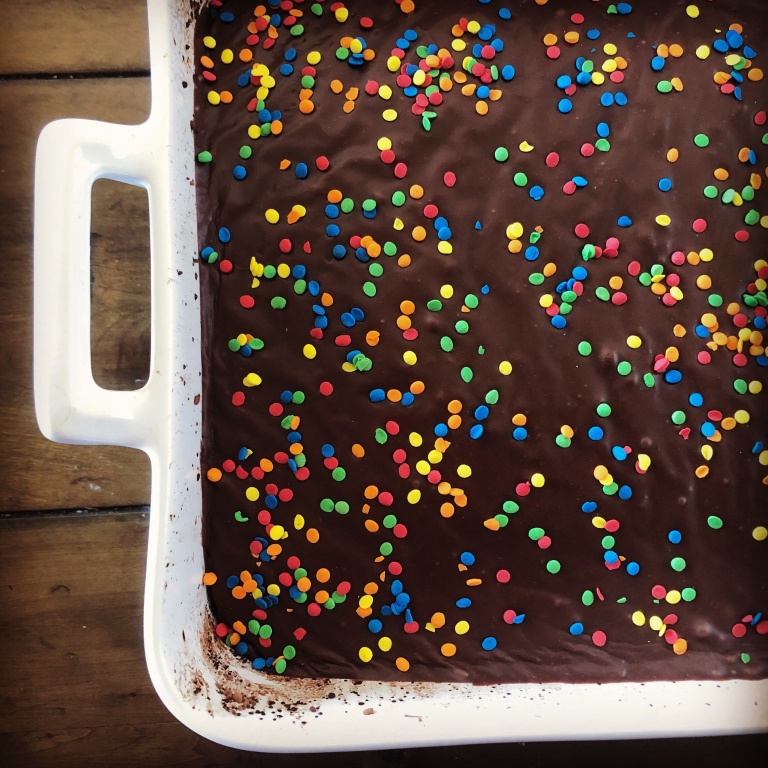 Something weird happened to me this weekend at the grocery store. I found myself in the bulk foods aisle stuffing my basket with such items as: quinoa, red and green lentils, flax-seed and varieties of dried beans. Is it possible to crave dried foods sold in bulk? Even my friend Julie asked me if I was feeling OK after I told her what I’d purchased.

My grandma sent me a recipe for vegan cake a few weeks ago. I clipped it out for its simplicity and because, I’m pretty sure, I’ve never ventured down the vegan baked goods road, and I thought I would give it a whirl and put the taste to the test.

Besides, it’s my birthday week. And in honor of my birthday week, I decided to bake a cake or prepare a dessert each day of the week – to share with my coworkers of course. In case the vegan cake bombed, I thought it would be best for me to start the week out with that particular cake, assuming the cakes would get better as the week went on.

I was a little bit nervous about sharing this cake with my coworkers this morning. I tried it the night before and thought it tasted decent but slightly healthy. Early in the morning I sent out a mass email to as many people as I could think of assuming it would take all day for the cake to disappear.

Three hours after I sent the email, I was hiding the last piece from anyone else who wanted to try the cake. People were in shock over the fact that the cake was vegan. It was super moist and decadently chocolate. A few of my coworkers asked for seconds and not even half of the people I invited stopped for a piece. So of course I was more than thrilled with my first vegan cake. Though it seems more like a faux vegan cake. A real vegan cake should be made with beet juice, soy milk, chia seeds or agave nectar. In my opinion, anyway.