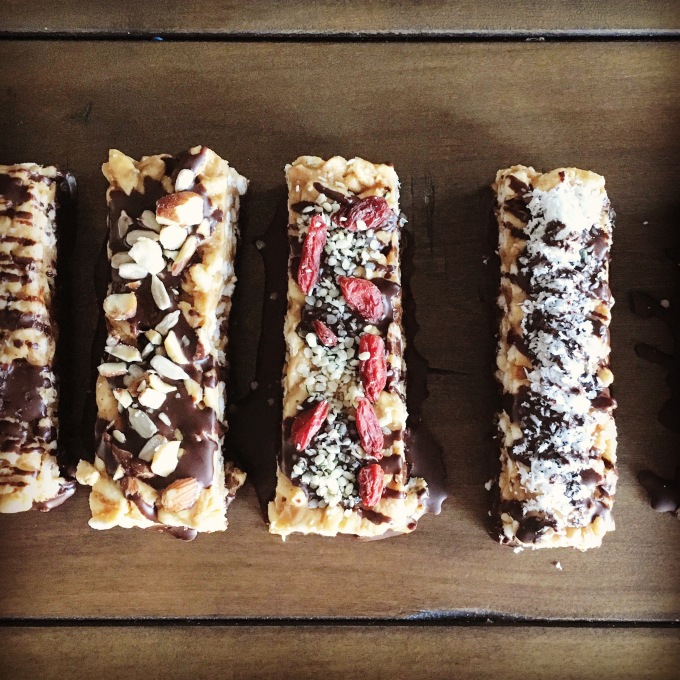 A couple months ago I bought a bag of puffed rice, I’m presuming because I likened it to brown rice cereal AKA (brown rice) rice krispies and intended to use it to make some sort of granola bar recipe. Tick-tock, tick-tock. Time passes and the bag of puffed rice sits on its perch in my kitchen. If you saw how much non-perishable food I have in my kitchen you would surely think I’m feeding a family of 6 instead of myself. But no. It’s just me. I buy ingredients intending to use them in some cool recipe I saw on Pinterest and then the food just accumulates.

So I was on Pinterest and I saw a “Goodful” video for easy rice krispie bars or something of the sort. And I thought that I had bought a bag of brown rice cereal a few months back so I thought it would be perfect to use in the Pinterest recipe I saw in the video. The video made the recipe look EASY. So I set out making the bars and low and behold realized I did not have brown rice cereal. Instead I had puffed rice cereal. What’s the diff? Plenty. The texture, namely. Rice cereal is crunchy. Puffed rice cereal is not.

But whatever. I had already begun making the recipe and did not have any alternatives to use unless I wanted to use bran flakes, which I believe would have been a substantially worse substitute than puffed rice. So I trudged on to make puffed rice bars that were pretty darn good despite the unexpected texture snafu. Good enough for me to eat the entire recipe in about 24 hours. Yep. That’s right. I didn’t share one. (Yeah, yeah. I do not wonder why my pants are super tight recently, OK?)

The original recipe on “Goodful” shows the bars drizzled with chocolate. I decided to add some delicious superfoods and/or other garnish to pep things up a bit. The ones with sea salt and the ones with chopped almonds were particularly delicious.