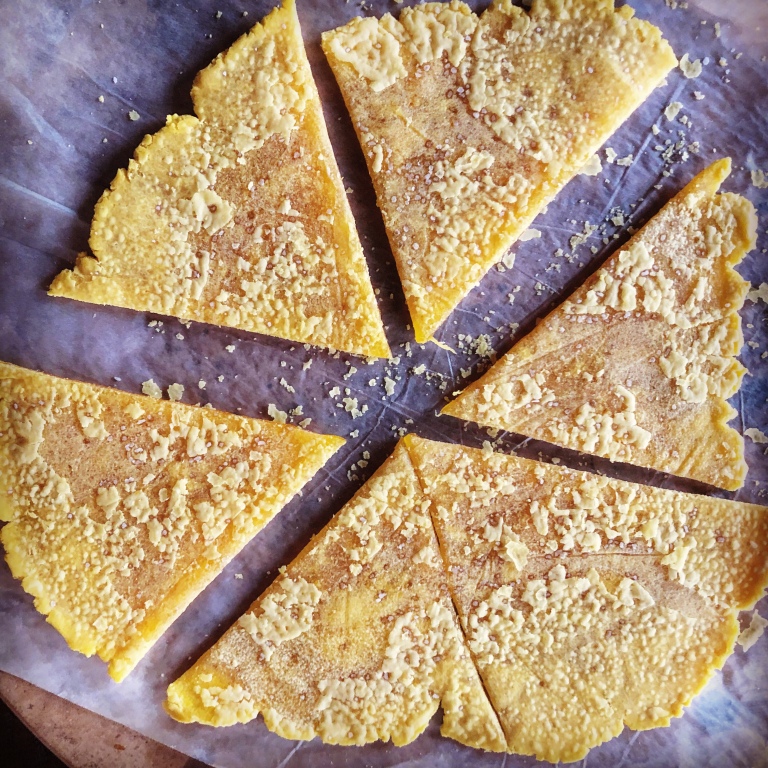 I bought some frozen Kabocha squash from Trader Joe’s intending to remake a recipe I’d made several years ago. However, when I thawed the squash I decided I wasn’t in love with the texture of precooked, frozen squash that’s been thawed. So I decided to find other recipes in which I could use up the squash.

I intended to make flatbread according to the Fresh Tart recipe I found. However, as I started rolling out my dough, I realized my dough looked nothing like the Fresh Tart pictures. Probably because I used squash puree instead of chunks of squash.

I made enough dough to yield 3 small balls of dough that I cooked individually in the oven. The first batch I baked on my pizza stone. The top looked great but then when I flipped it over the bottom looked undercooked. The recipe said the bread should be pliable and this definitely was. So I took a bite of it and I was not overly fond of the taste because of the chewiness of the texture. It was then I decided to to crisp up the bread by cooking it longer. Thus paleo “pita” chips were born.

For the other two batches of dough, I baked them on a cookie sheet instead of the pizza stone. And it seemed like the cookie sheet batches came out better.

My dad, sister and I ate these straight out of the oven with hummus, which yeah I know is not paleo but that’s what I normally eat with pita chips! And I had nothing paleo-ish and pita friendly on hand.