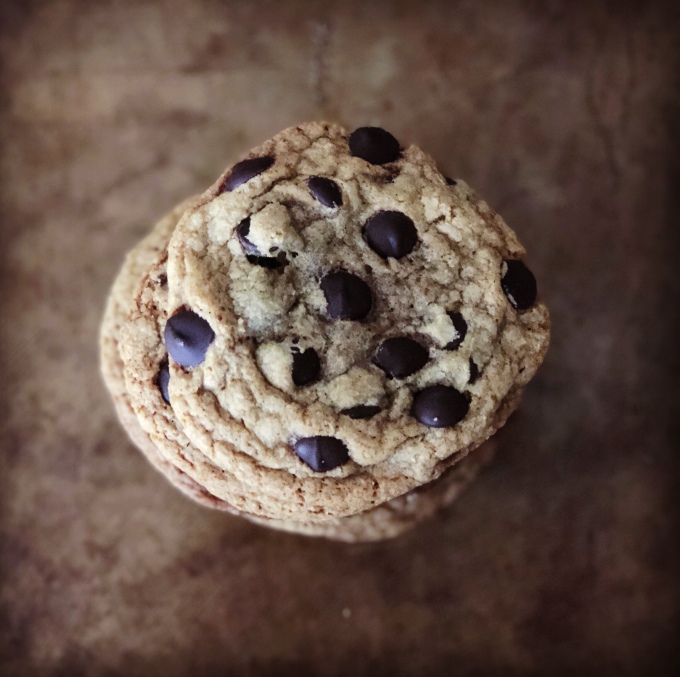 When I lived in Portland I would oftentimes get together with my gal pals on Wednesdays and drink wine and make food. Some creations we made were Ramen Burgers, Salt and Vinegar Potato Slices and Pumpkin Gnocchi. On a recent trip back to Portland I went to my friend Jen’s house where we drank wine and cooked food and drank coffee and cooked food and drank more wine and then finally ate the food. We also reminisced about our Wine and Food Wednesdays and did some catching up.

At any rate, when she suggested that we have a Wine Tuesday and bake a new Bon Appétit chocolate cookie recipe together on the phone, I of course was all in. The recipe we chose popped up in Jen’s news feed on her phone, which made us both chuckle. I get politics and terrorism in my news feed. She gets food. But really she had me at the sentence, “Do you want bake chocolate chip cookies together?” I’m all in, all the time, for baking chocolate chip cookies.

Jen told me this funny story when I saw her in Portland. She got a Kitchen Aid mixer for some big life event – perhaps her wedding – and never used it. Never, ever. My jaw literally dropped when she told me this. How?! Do?! You?! Make?! Cookies?! were the words that immediately popped out of my mouth. She said she mixed them by hand. Seriously?! Whoever heard of that?!

Well the funny thing about this story is that she eventually gave her Kitchen Aid away because she never used it. The friend who took on her Kitchen Aid was rightfully suspicious about the gift. She simply could not believe Jen was giving it to her. I don’t blame her! To ease her friend’s mind, Jen promised she would ask for it back if she had giver’s remorse.

Not much time passed when Jen got into this bread making kick and decided she really needed a Kitchen Aid mixer to make her bread-making more easy-breezy. So she gently inquired with her friend to whom she had bequeathed the Kitchen Aid if the friend had used it/ was in fact now using it. Her friend said she hadn’t used it, laughed at Jen and promptly gave the Kitchen Aid back. Now Jen wonders how she ever went so many years not using her Kitchen Aid.

So here’s my beef about Kitchen Aid mixers. They don’t evenly mix the batter/dough without you having to do a really good job of scraping not just the sides of the bowl but also the bottom. I cannot tell you how many times I’ve made cookies or brownies or a cake and got to the bottom to find a butter/sugar slick that had not been incorporated into the dough/batter. This can ruin a cake layer or a pan of cookies which is what happened to me with these cookies.

As Jen mixed her cookies by hand, I used my trusty Kitchen Aid mixer and didn’t bother to scrape down the sides or bottom. Yes I am a lazy baker but also because the butter was browned and melted I didn’t even think scraping would be a necessity. It was. So while the first batch is baking I peek into the oven via my oven light and gasp at how quickly flat my cookies have become and frantically ask Jen if her cookies are also thin as pancakes. We trade some pictures back and forth to confirm my cookies look like sh*t compared to Jen’s.

Now with the second batch of cookies, I’m eyeing them more prodigously because I decide that I need to rotate the pan mid-bake so the cookies can brown more evenly. Four minutes into baking my second batch I go to rotate my cookies and the cookies have barely started to spread. I’m thoroughly confused! By this time in my last batch my cookies were soooo flat.

Which brings me back to my Kitchen Aid. I’m pretty sure the fact that I almost never completely incorporate all ingredients into dough/batter when baking is causing my cookies to flatten, my cakes to fall and possibly also effects the baking time in my oven.

As she should be, Jen was triumphant over her hand-mixing method and the fact that her cookies turned out better than mine. Interestingly enough, I liked the look of the first batch better. Those cookies got more brown and wrinkly. They had a crisp edge and a chewy center and tasted damn delicious. The second batch looked more eye-pleasing but didn’t get nearly as brown or as wrinkly as the first batch. They were also crisp on the edges and soft in the center.

I was pleased with the recipe but not my execution of it. I think if you scooped the cookies and then chilled them for a few hours, it would stop the cookies from spreading quite so much. So would completely mixing all the ingredients together in the mixer…

If you think the recipe seems weird or some steps unnecessary, I’m with you. As Jen and I were baking she read the description of why you want to brown only part of the butter – something to do with water content. You want some but not all of the water content in the butter. (I tried to find the explanation on Bon Appétit’s website but failed.)