Sis and I were at Costco the other day when I almost grabbed a package of blackberries (12 ounces for four dollars). When I asked Sis if she would eat any if I bought them she was all… why would you buy them? We can just pick them along the side of the road in the park.

That is exactly what we did today. Filled with visions of blackberry desserts, we took the dogs down to the park and meandered the path for about an hour or more and filled up two quart-sized rubbermaid containers with blackberries where one guy congratulated us on saving $1.50. More like $10!

When considering what to do with all the blackberries we scavenged, we first thought about doing a crisp or cobbler. We had recently made a healthy blueberry crisp that we thought we could replicate with blackberries. Then Sis began describing something she had made with blackberries once that involved few ingredients like sugar and butter and flour. She touted it as the best blackberry dessert she’d ever had.

What’s a buckle? I asked. Neither of us knew but surmised that she may have been describing a buckle. When we finally got around to looking up recipes for blackberry buckle we agreed that’s what she had made. Only the recipe she found described it as a cobbler. Hmmm.

This got us to thinking, isn’t there a difference between a buckle and a cobbler? I once made a pumpkin cobbler that looked suspiciously like a blackberry buckle recipe I was viewing on my laptop. I remember not liking the pumpkin cobbler at all. I was not a fan of the texture.

I looked to Spruce Eats for information on whatinthehellisthedifference between a buckle and a cobbler and got all the information I needed and more. A buckle is essentially cake with berries (either mixed together or layered) with streusel on top. I looked up blueberry buckle recipes which confirmed the definition provided by the Spruce Eats. This made me giggle because it appears a lot of people are mixed up about what truly is a cobbler and what truly is a buckle.

Then I looked up recipes for blackberry buckle and all appeared to be the same but different than blueberry buckle in that they were without streusel. How maddening!

Clear as mud? Yeah. Me too.

This recipe is adapted from American Heritage Cooking. This was so good Sis and I may have eaten two thirds of the pan. 🤷🏼‍♀️ This is a perfect brunch item when serving with lightly sweetened whipped cream. 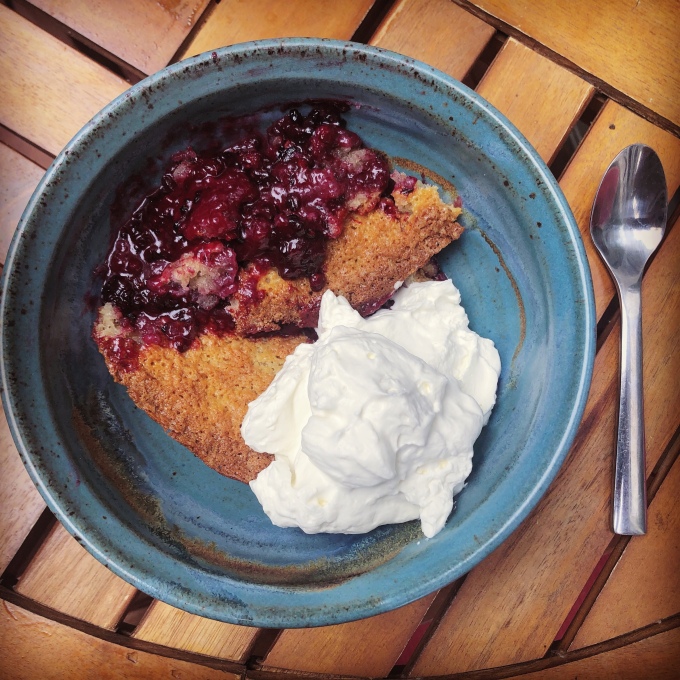