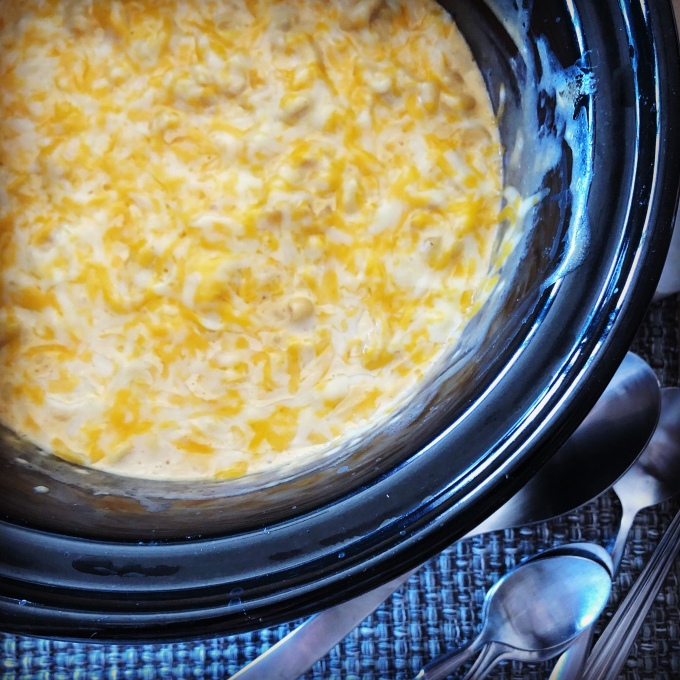 So here’s the story about this Mac and cheese. I was invited to a Salmon Bake in Portland, Ore., by my friend Jen. Every year she goes fishing in Alaska and comes home with tons of fish. She’s so lovely. She hosts a gigantic party to share the fish and asks people to bring sides dishes, appetizers, desserts, etc. I wasn’t living in Portland for her first Salmon Bake in 2017, but happened to be able to pull off a visit this year that coincided with her second annual salmon bake.

Normally desserts are my go-to item to bring to a potluck. However, the first few items she rattled off as already claimed by other party-goers were desserts so I decided to go with something else altogether. It needed to be something easy because Sis and I were off to Mount Hood the next morning to go camping. Since Jen said there was no food theme for the party, I decided to go with something super easy and something I assumed everyone would love: Mac and Cheese. To make it even easier on myself, I searched high and low until I found a crockpot mac and cheese recipe that looked good enough to eat through the computer.

The day of the party Sis and I were busy getting ready for our camping trip. We had to drive to downtown Portland to pick up a crash pad for our attempted outdoor bouldering adventure. We were allowed to pick up the crash pad two hours before Jen’s party, which wasn’t the best timing. Especially because when I went to make the dish two hours before the party was starting, I realized the recipe called to cook the noodles for two to three hours, stirring every so often.

Well that just wasn’t going to work. It was going to take us an hour or more to drive into Portand, get the crash pad, and return. So I decided to start the noodle dish prior to us going, cook it on high (and cut the time in half) and hope that if I didn’t stir it for an hour it wouldn’t be a disaster.

By the time we got home (unknown time later because I had set the time for an hour and the hour had already elapsed), the noodles were not ready. They were a gummy version of al dente. We didn’t have time to waste, though, so I figured they could keep cooking at Jen’s. I cooked them about 15 minutes longer once we arrived and then set them out for people to dig in as Jen rang the dinner bell.

I didn’t eat immediately. I somehow found myself in conversation with two of Jen’s neighbors. After more than an hour, one of the neighbors pulled me away so we could dig in. (Most everyone was done eating at this time.) We were disappointed to see the food ravaged by the time we pulled up to the buffet table. There was very little fish, but we were able to try both some halibut and some salmon (both delish). My mac and cheese was gone. One of the salads was gone. Several other items were gone as well. This is probably the second time ever I’ve made something for a party and didn’t even get to try it!

So of course I had to make it again so I had some concept of how it tastes. I made it two more times. The first time I started making it knowing I had Velveeta up in my cupboard that had been there possibly 3 to 4 years. Did you know Velveeta spoils?! I was shocked as shit to open it up and find it had turned colored, shriveled a bit and was kind of greasy. That was strike one. Also, I didn’t have any evaporated milk in my cupboard. I persisted, however, and used all regular milk and threw a tiny amount of cream cheese into the mix as well.

The dish turned out fine but I found I had to add a bunch of milk while it was cooking. I again cooked it on high instead of cooking on low. Overall, I found the texture of the noodles to be gummy.

So I tried a third time after having bought more Velveeta and some evaporated milk. This time I cooked it on low, as prescribed. I also added the shredded cheese at the end. The noodle dish turned out perfectly creamy, no doubt thanks to the Velveeta, but still a bit gummy and overdone. This appears to be a typical problem for this recipe. The author of the recipe I followed vows that if you don’t cook it too long, the noodles will not absorb too much and get over-engorged. Having tried the recipe three times, I would have to disagree. They seem gummy no matter if they are al dente gummy or overcooked gummy. But perhaps I’m using too cheap of noodles.

The thing is, that’s OK to me. This is the perfect recipe to take to a potluck where everyone will eat it immediately; not so much for a time when you want to be eating leftovers. So if you’re looking for a super easy casserole to take to a potluck party, look no further. It’s sure to please. It got tons of compliments at the Salmon bake this year!