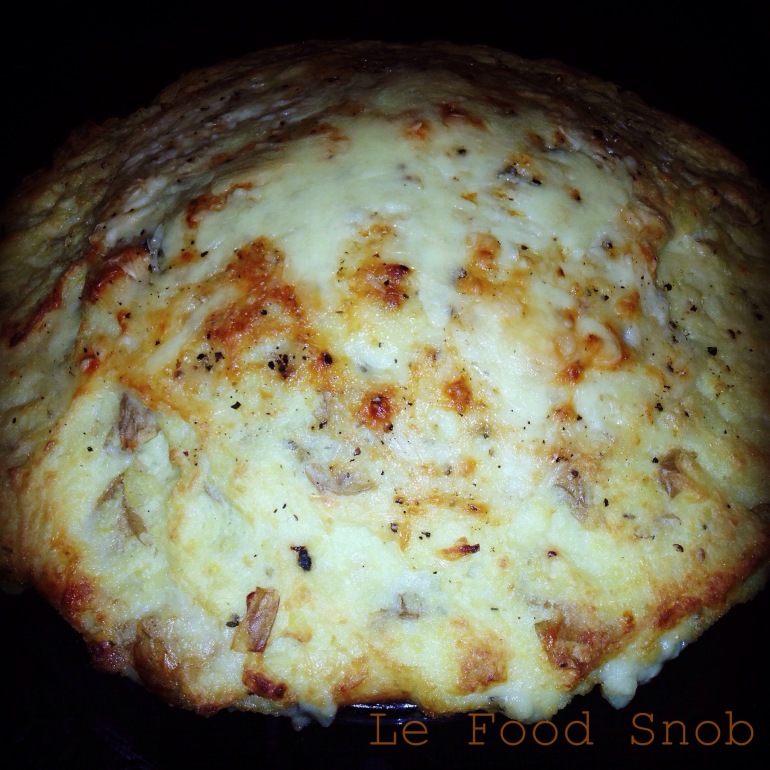 This is probably the worst time of year to be living in temporary housing. It’s the holidays and I don’t have any of my own kitchen stuff to cook with. To improvise this year, I decided to put together a few dishes that required very little prep work.

You gotta have turkey on Thanksgiving. It’s sacrilegious not to. So I opted for ground turkey. I made a super easy Shepherd’s Pie by layering pre-cooked stuffing (bought at Trader Joe’s), ground turkey mixture using my favorite vegetables (mushrooms and onions) and Asiago cheese mashed potatoes. I’m providing a basic recipe. I didn’t do much measuring, so keep that in mind while you’re proceeding.

There are a few things I would have changed about this recipe, namely cutting up the mushrooms, decreasing the amount of mashed potatoes (one pound should do it!) and perhaps increasing the amount of stuffing. The stuffing seemed to disintegrate under the weight of the meat and potatoes. That being said, cutting back on the potatoes may solve the problem by itself. Since I LOVE stuffing, I would have liked for the stuffing to have been a bigger presence in this dish. I think this recipe could work well with leftover turkey the day after Thanksgiving, too!

Writing this blog reminded me of a story I was telling my new coworkers recently about the time I worked for the Cheesecake Factory and received a secret shopper score of 17%, in part, because I didn’t know how to describe crimini mushrooms to the “guest” when she asked what a crimini mushroom was. Though I had fielded other food-related questions and answered them just fine, she wrote me up as “un-knowledgeable” for not knowing what a crimini mushroom was. She was very specific in her write-up. I can’t make this sh*t up. For the record, I don’t think I’ve ever received a score below an 80% on anything. Ever. That 17% and crimini mushrooms haunt me to this day. In case you were wondering, crimini mushrooms are an immature and brown edible mushroom. When immature and white, you know these mushrooms as white or button mushrooms. Immature and brown they are crimini and mature and brown, they are Portobello. Essentially all these mushrooms I thought were different my entire life are actually the “same.” You can use that as trivia the next time you want to stump someone.