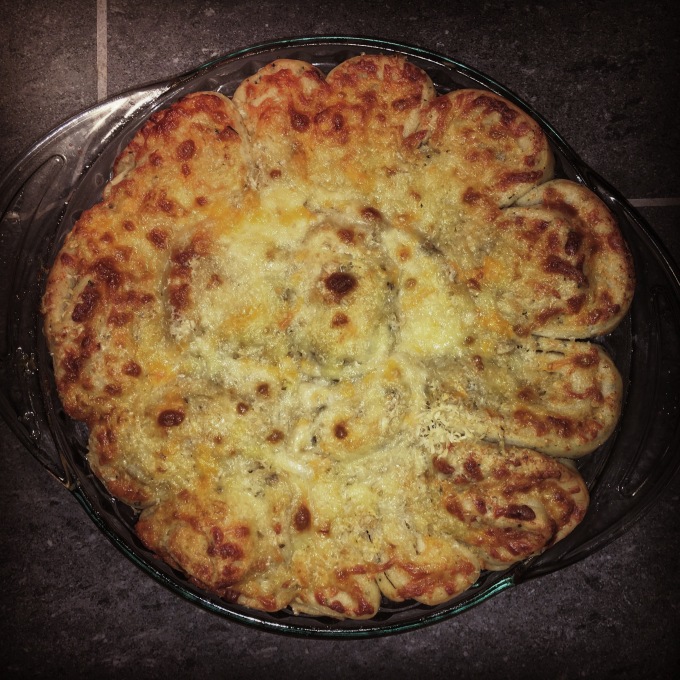 I was challenged to recreate these awesome garlic rolls that are a must when ordering pizza delivery from a local pizza joint, Broadway Pizza. OK. After having a conversation with a coworker about how great they are I basically challenged myself to make them. The rolls really are best if you eat them at the restaurant versus getting them less than piping hot when you order delivery. But admittedly staying in and enjoying your air conditioning, sweatpants and delivery is always so much more appealing than walking to the pizza place. At least in my mind. So I was convinced that a happy medium would be to make your own rolls at home.

I decided to use a no-fail pizza dough recipe that I’ve been using for about a year now. I actually had some dough in my freezer to use for this recipe but decided to make another batch because seriously you should always have this dough on hand. My grandma sent me the recipe, which is taken from a Penzey’s spices catalogue. This dough has served me well in the past when making grilled pizzas and has received lots of compliments. On top of that, it’s super easy to make. So I figured I would start my cheesy garlic rolls with the tried and true dough recipe and go from there.

The only thing I was thinking I would need for the toppings were butter, garlic, mozzarella cheese, Parmesan cheese and maybe some Italian seasoning such as basil. (There’s already seasoning in the pizza dough.) I envisioned rolling the dough out into a rectangle, topping the dough with butter, garlic, and cheese, rolling the dough up and then slicing into pinwheels. I found a good recipe to imitate at flouronmyface.com which had directions to let the rolls rise for 30 minutes before baking. Sounded like a good idea to me!

These rolls turned out to be SUPER garlicky because I used both garlic powder and freshly minced garlic in my rolls. I LOVE garlic. But they were almost too garlicky for me. I don’t think I’ve said that about any dish ever before in my life! Which is why I make the suggestion to use one or the other in the above recipe.

I put the rolls in a pie pan all scrunched together like you would when making cinnamon rolls or some other type of sweet or savory roll. I decided after the fact that I would have rather have kept them individually separated because the dough doesn’t crisp up when they are all squished together and touching. The garlic rolls at Broadway pizza are crusty on the outside. All-in-all, my recipe was a good first try but not necessarily what I would have wanted it to be. Also, the part in the directions where it says to tightly roll the dough? Yeah. I don’t know how to do that. What I thought was “tight” ended up not being tight at all because when I cut into the roll to make slices the ingredients were all loose inside.

I guess I’ll have to try this recipe again with a few tweaks. Aside from the minor differences in appearance texture and the overly garlicky taste, these rolls were pretty darn good tasting. But anything with that much cheese pretty much has to be. Right?