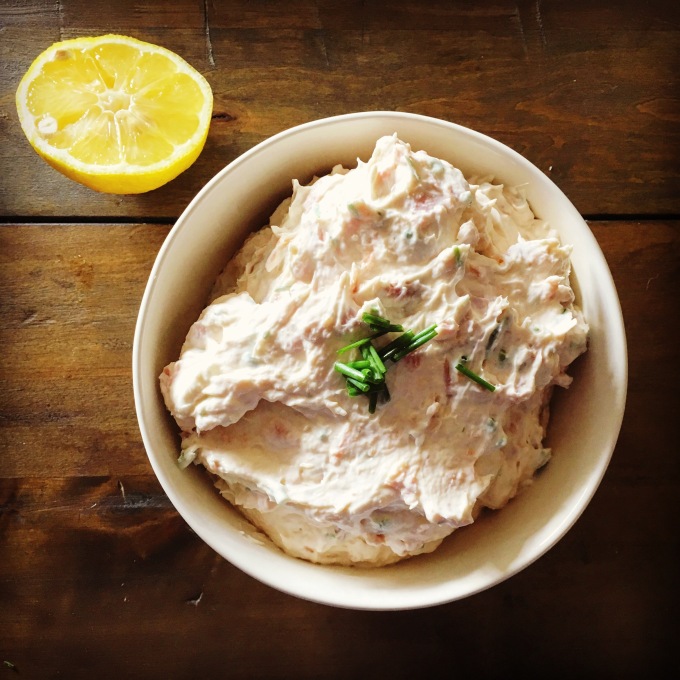 One of my friends has a house on an island in Alaska. Her family convenes there every summer (at the least) and they fly back to the Pacific Northwest with as much fish as they can carry. Just kidding. I think they have the fish shipped back. When I lived in Portland, she was nice enough to share what she caught on many occasions. She had a smoker and was known to smoke at least some of the salmon that she caught.

There was at least one birthday (if not two) where she gave me some of her delicious smoked salmon as a gift. When Jen shared her smoked salmon it was the first time I had ever been inclined to try smoked salmon. Oh sure there were times growing up (holidays, mostly) where there would be a slab of smoked salmon plated as an appetizer. And one time when my sister and I lived together in a tiny garage converted into an apartment when she took me in after I first moved to Portland she used some store-bought (thin) smoked salmon in a pasta recipe. I opted for fresh salmon on my portion. Back to Jen’s salmon. For some reason when Jen introduced me to her smoked salmon I didn’t turn my nose up at it (like I had with all other smoked salmon before) and I fell in love.

I thought I was doomed to never have Jen-like smoked salmon again when I moved back down to Southern California. But I have happily found several stores that carry smoked salmon that’s Jen-like. It’s thick at least. Which reminds me of Jen’s. So on occasion, whenever I’m in the mood for cheese and crackers, I’ll also buy smoked salmon and have that with water crackers, too.I’ve had some smoked salmon in my fridge for a few weeks now.

For the longest time I had been intending to make a smoked salmon dip. Jen once or twice made an outstanding smoked salmon dip that she served with sliced cucumbers. It was sooooooo good. So I tooled around on the internet trying to find the perfect recipe. Most recipes that I saw called for horseradish, which I don’t particularly like. Not that I would be opposed to using it in a recipe, but I didn’t have any anyway. I needed a recipe that used ingredients I actually had on hand. Finally I found a horseradish-less recipe at Natasha’s Kitchen that looked good enough to try. 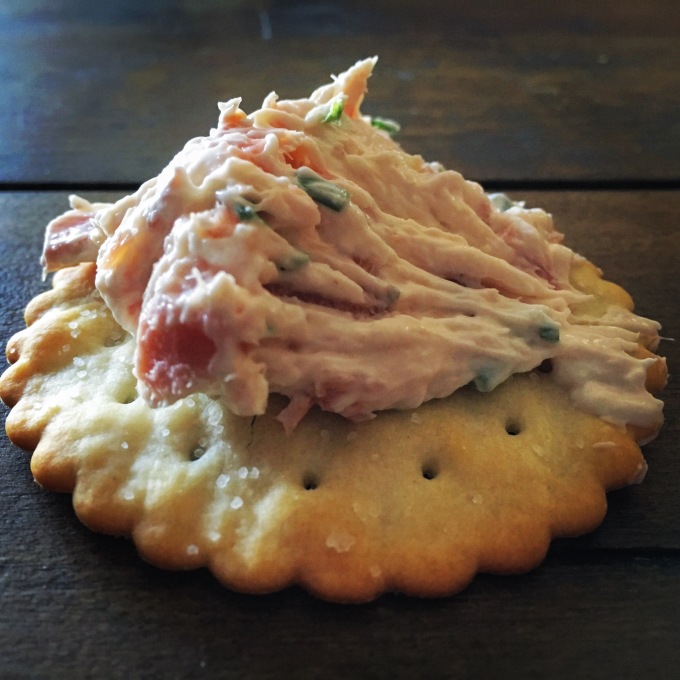 I waited a full four hours with the dip chilling in my refrigerator before I tried it. But I couldn’t wait a minute longer to cut up the cucumbers I had purchased for the occasion. Instead I found some crackers I bought at Fresh and Easy a year ago that were garlic flavored (and slightly stale). I figured the dip would cover up the fact that the crackers were slightly stale.

This dip is GOOD. I can’t decide if it’s good as is OR if it could use a bit extra smoked salmon in it (I only used four ounces). It’s very creamy and very cream cheesy. But to me the star of the show should be the smoked salmon. If you agree, you should add another two or so ounces of smoked salmon to the recipe.

Luckily for me I have about half of the smoked salmon I purchased leftover so I can make another batch next weekend if the mood strikes.