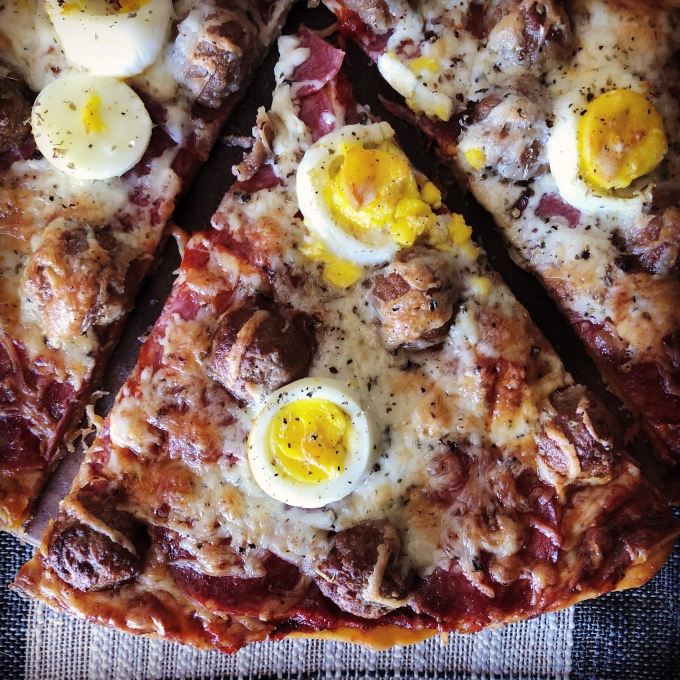 Ever since I made a Timpano for Easter dinner, I was dreaming of ways I could use up the remaining salami and cheese and, naturally, my mind drifted to recreating a Timpano as a pizza. Do you know what a Timpano is? I was introduced to it via Stanley Tucci’s cookbook, but Tucci made the Timpano famous in the movie Big Night. See a clever video step-by-step by Binging with Babish here.

In this pizza version I used homemade pizza crust instead of using the Timpano dough (though that would be an interesting crust to try). I also use the leftover unopened package of salami with some party-sized meatballs (cut in half), slices of provolone cheese, some grated basil and garlic cheese, a red pizza sauce (Trader Joe’s brand) and some sliced hardboiled eggs.

I went back and forth between adding hardboiled eggs on top and raw eggs just before cooking. My preference would have been the raw egg. I went with the hardboiled egg slices because that’s what’s in a Timpano and because I didn’t really want this to be a breakfast-y pizza with runny egg yolk.

Timpano ingredients taste fantastic as a pizza. I gave my neighbor two slices (literally handed her two warm slices wrapped up in foil as she got off the elevator after work one night) and she agreed.

I wasn’t overly fond of the hardboiled egg but ate it anyway to get the true Timpano pizza. Fair warning that reheating a slice of this pizza is a marvelous idea but pull off any remaining hardboiled egg. It will end up like rubber if you don’t. But if you don’t mind rubbery hard-boiled eggs on reheated pizza then by all means, test it out.