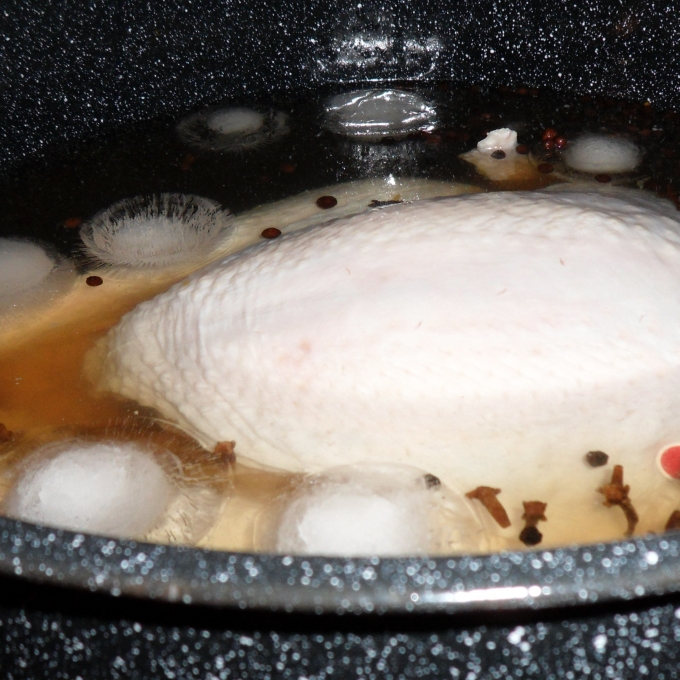 I read somewhere that the way to ensure that you do not dry out your turkey when roasting is to brine the turkey beforehand. I also liked the idea of a brine because a brine (in theory) is rather simple.

What I learned when making my first brined turkey is that brine needs to be prepared ahead of time. In other words, don’t start it at 11 p.m. the night before you’re cooking the turkey. It needs plenty of time to chill – especially if you’re making a large bird.

When I say brine needs plenty of time to chill, I mean several hours. I was a bit worried when I stuck my turkey into my still slightly warm brine that I was somehow cooking the turkey a wee bit and then subsequently cooling it down. At 1:30 a.m. I no longer cared. I don’t imagine my dad did either as I’m sure he was sick of me banging round the kitchen (literally banging as I was trying to dislodge the ice cubes I’d made).

I’m not sure what the point of the ice is in this recipe other than to cool the liquid down. I realized when I started to throw this brine together that I didn’t have any ice cubes. Nor did I have ice-cube trays. (Where did those suckers go? I know they’re here somewhere!) I made my own ice cubes (12 of them) by freezing water in muffin tins. I’m doubting that 12 small pucks of ice is what’s desired for this recipe; but it’s all I had.