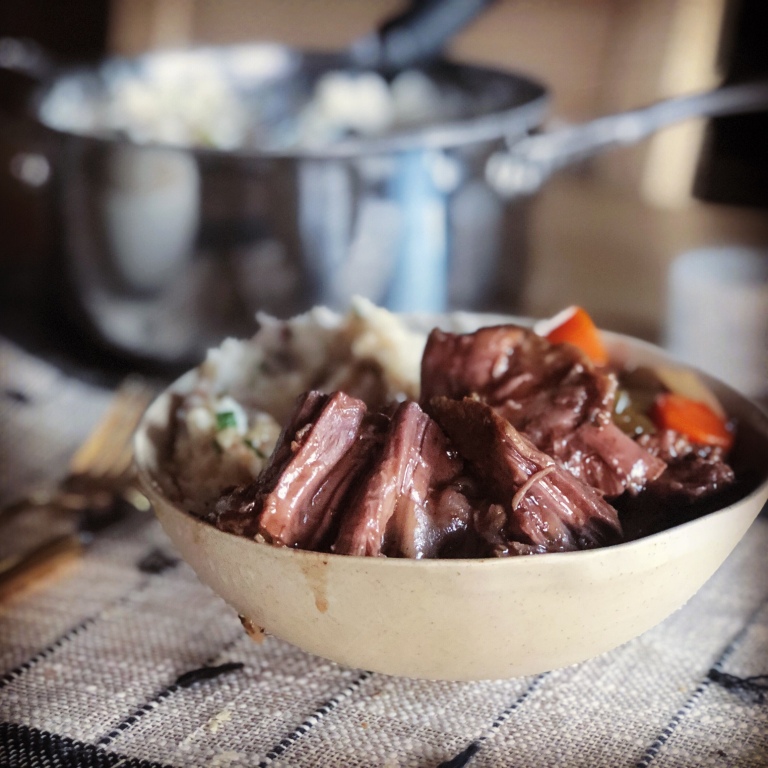 The last time I had a crock pot roast was circa 2005 or 2006, when my mom did all the legwork for her Lipton Onion Mix roast recipe in my crock pot, and I reaped the benefits. I’ve always been more of an avid cook than the regular Joe, but at that time I wasn’t into a) blogging about food b) fixating much on entrees – I focused mainly on desserts.

My grandma sent me this recipe the other week, which is perfect for my new obsession of cooking a big meal on the weekend in order to have pre-made meals all throughout the week.

Note: If the roast breaks into pieces when you trim away the fat, just cook each piece in the skillet until browned.

Sooooooo I opted not to trim the fat from the roast. Why? Because flat brings more flavor, right? Besides, a little fat never scares me and the roast I bought didn’t seem very fatty.

I floured the roast after seasoning it, even though this was not in the directions. This is a step my mom does, and is common during the browning process. Also, I used olive oil instead of non-stick spray to brown the meat.

I substituted a pound of Dutch Yellow Potatoes for the carrots and celery (neither of which I enjoy to eat when cooked). I chose these potatoes because Trader Joe’s labeled them the best potatoes for roasts. I kept them whole because they’re small – I didn’t want them getting mushy after 8 hours in the crock pot (I always use the longer, lower heat method of crock pot cooking). Speaking of leaving things whole, I left the mushrooms whole as well. Mainly out of laziness but also because I like slicing into whole mushrooms when I’m slicing into a nice piece of beef.

Once I had everything in the crock pot and the thing was covered, I read the part where you’re supposed to mix everything gently. Whoops! This was not an easy feat, as the ingredients came all the way up to the top of my crock pot. Once the crock pot lid was again secured, I realized I forgot the thyme. Oopsy! I sprinkled some dried thyme over the top of the ingredients too lazy to mix again. About six hours into the cook time (when I couldn’t smell the roast cooking), I became paranoid about the lack of smell, unhooked the latches that keep the top secure and stirred the ingredients.

So here’s the verdict: I wasn’t a fan of the potatoes! When my mom asked me what I was making with my roast, she mentioned she likes mashed potatoes or dumplings. Since I’ve never had whole potatoes in a roast before I figured I would give them a shot. They were rather bland.

In fact, the entire dish seemed to need salt. This isn’t necessarily bad – I’m a salt fiend, so me thinking something ‘needs salt’ could be ‘perfectly salty’ to someone else. Also, I wasn’t sure if the texture of the meat turned out right. It seemed slightly tough (in spots) when I tasted it. (I tasted a lot of different ‘spots’ on the roast, OK?) My mom says my grandma always makes beef roast the day before she plans on serving it. She then cuts the beef and places it back in the gravy. This tenderizes the meat. Since I planned on taking the dish in my lunch all week, I was fine with that.

Oh, and one last thing. I added 8 or 10 tablespoons of cornstarch to the liquid! I wanted gravy, not a thin sauce. And honestly that’s how long it took to get a gravy consistency. I would try this recipe again – and tweak it perhaps. Like make it with dumplings and some different herbs or something.

Road to a Healthier Life