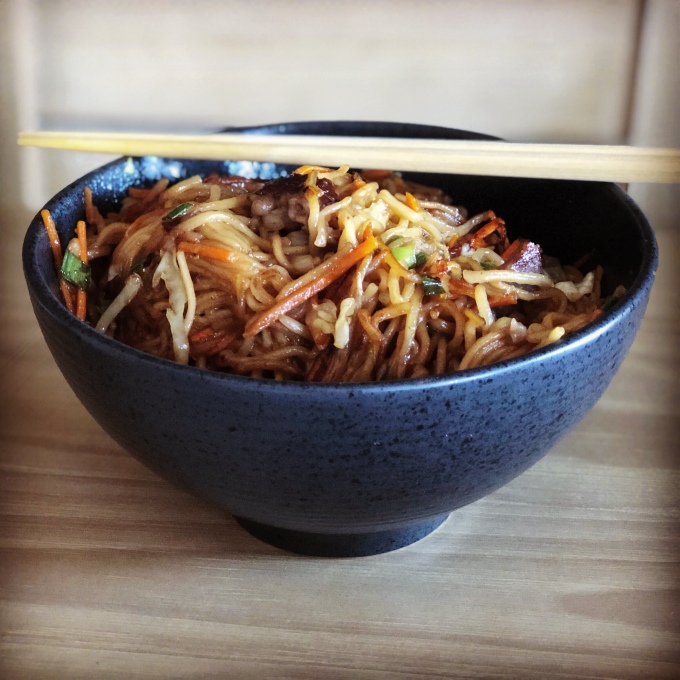 When I started this blog about 9 years ago, I was not a very evolved foodie. My diet was crap. And, by diet, I mean my food choices.

I didn’t really eat vegetables at all besides corn, potatoes and mushrooms. At a restaurant I would ask to omit most if not all veggies or I’d pick them out if omitting wasn’t possible or seemed weird or rude. To this day I rarely eat lettuce on burgers or sandwiches but love sliced tomato.

Back when I started this blog, if I could have eaten cake and ice cream for every meal, I would have. Or maybe I would have alternated cake and ice cream with burgers and fries and pizza. Oddly, even though my cholesterol levels typically went up and down, sometimes going higher than the acceptable range, I never really had a weight issue. So I figured I was doing OK with eating what I was eating.

In the past decade my tastes have evolved and I’ve learned a thing or two about the importance of health. In the last year I’ve really expanded my tastebuds when it comes to vegetables and, to my surprise, learned I like a lot of vegetarian and vegan foods. Most of the time these days, I mainly gravitate toward vegetarian or vegan. Don’t get me wrong. I love meat. It’s just that I’ve also realized I love foods that don’t contain meat.

Amongst the most surprising of my food revolutions is the expansion of my tastebuds concerning Asian foods. You see, I love Asian foods. But they are mainly vegetable-filled. I never really ate vegetables consistently until my mid to late 30s. In my teens I tended to eat the same (not-too-vegetable-y) standbys like lo-mein or fried rice eventually graduating to cashew or sesame chicken. These were about the least vegetable-y dishes I could find; pushing the vegetables out of the way to get to the best part (meat and carbs) was simple.

I first tried sushi in my late 20s and began eating it regularly in my early to mid 30s. I was introduced to Korean BBQ in my late 30s. Now I’m obsessed. I believe my taste bud expansion is due in large part to moving to the West Coast in 2008, though I was introduced to sushi by my friend Jen in Milwaukee, Wis.

In the last year of my 30s I spent a lot of time with my sister at her home in Portland, Ore. She happens to live very close to an Asian grocery store (H-MART) and has filled her kitchen with all sorts of yummy Asian staples. I’ve always been one to copy my sister I guess. Once we began cooking with her Asian ingredients, I was hooked. I went out and bought myself a bunch of Asian pantry staples, some of which I carted home to LA with me! And some of which I left behind with my sister. Incidentally, within the last year my sister also got me into bouldering and nearly got me into camping (our planned camping trip didn’t work out.) 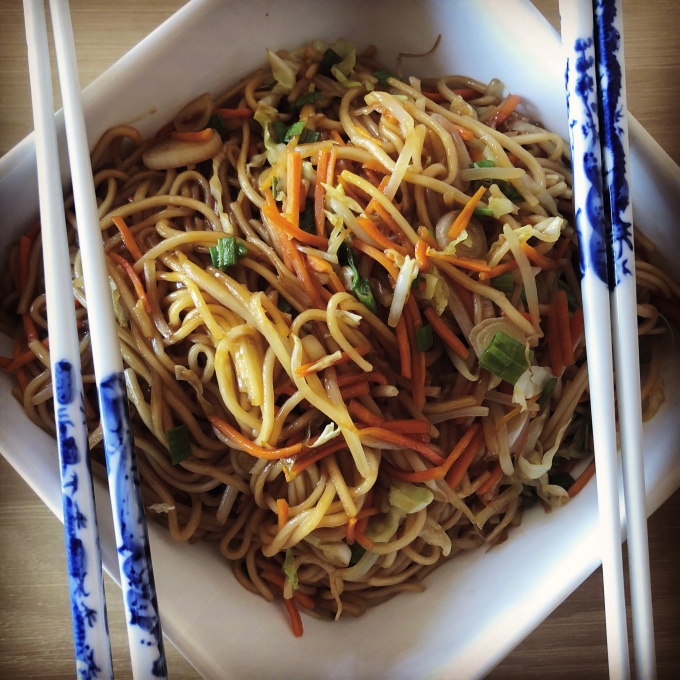 It’s taken me a while to settle back into my routine since I’m no longer traveling back and forth to quiet, beautiful, green Portland. While I can’t physically go to Portland right now, I can mentally go back there by creating some delicious Asian inspired foods in my LA kitchen. So I rounded up some traditional Asian stir fry vegetables (cabbage, carrots, green onions and bean sprouts) and used a recipe I found at The Tasty Bite blog as my inspiration to make a noodle stir fry.

While I may eat vegetarian Asian appetizers from time-to-time, I traditionally eat meat in my Asian meals. Usually shrimp or chicken. Sometimes pork. Almost never beef. But Yaki udon is typically made with meat–pork, apparently–and Karen’s recipe for Udon Noodle Stir fry used beef and I happened to have some frozen chuck roast in the freezer. So I decided to give beef a try instead of subbing another meat. You can easily sub thinly sliced chicken or pork or shrimp as your meat or leave it out altogether for a tasty vegan meal.

Here’s what I learned while making this recipe:

A year ago you couldn’t have paid me to eat cabbage, carrots or bean sprouts in an Asian stir fry — the green onions would have been fine. I didn’t really notice the vegetables in this dish though it’s chock full of vegetables. All I tasted was an amazing flavor made amazing because of the vegetables. This is an awesome and amazing dish to sneak in veggies. 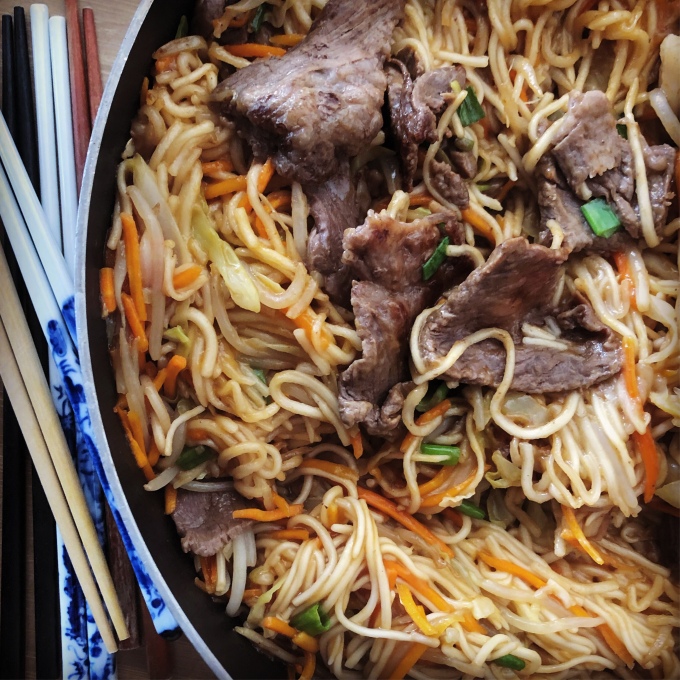 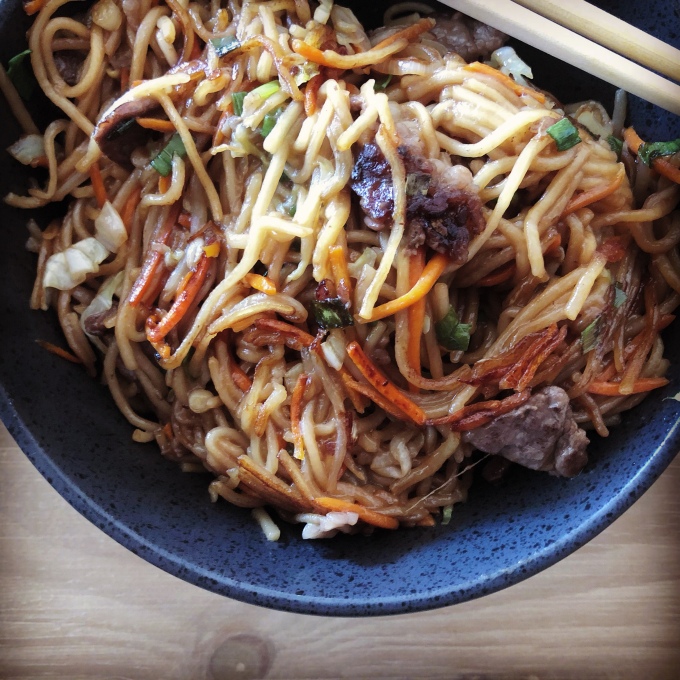