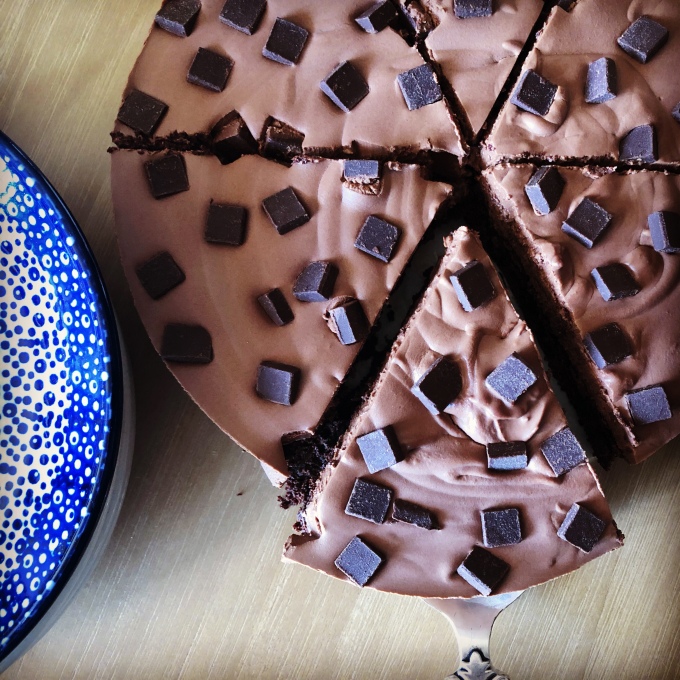 I’ve never been a ginormous fan of vegan desserts (in general). Singularly, I have had some outstanding vegan desserts, like this vegan chocolate cupcake I used to buy when I lived kitty-corner from Koppa’s Fulbeli Deli.

The mark of an outstanding vegan dessert, in my opinion, is something that doesn’t taste healthy. Like you wouldn’t know it’s devoid of eggs or butter or eggs and butter. Dessert should taste delicious and indulgent and sweet. Even if it’s made with really healthy top quality ingredients. If I’m going to eat dessert it certainly can’t taste healthy.

I bought a vegan dessert cookbook a few years ago. I made exactly one item from that cookbook, a chocolate peanut butter cake, which I found to be OK and then shelved the book. So it surprised me when I saw Feasting on Fruit‘s IG post about Brownie Mousse Cake, and I immediately ran out and bought ingredients to recreate the dessert. OK I figuratively ran out by buying some chocolate and almond butter (amongst other things…) from Vitacost which was delivered the very next day. I could not find the cute HU Gems that Natalie used (not even on the HU Kitchen website!). Instead I purchased Artisan Kettle Organic Extra Dark Chocolate Chunks, which was a good substitute (just not as cute as the gems).

I believe in eating what you want when you want whether that’s Baba Ganoush or Fried Cheese Curds. (I’m polishing off a Costco tub of Reese’s Pieces as I write this.) I no longer believe in diets. Or restriction. Or mindful eating. I will never do another cleanse or diet (I’ve tried them all in the last 20 years) or eat strictly ketogenic or paleo or vegan or vegetarian or fast intermittently. For inspiration on quitting dieting forever, read Caroline Dooner‘s book, The F*ck-it Diet.

I do not believe in regimented exercise unless you are trying to make it to Wimbledon, the Olympics, the World Cup, Nationals or the WNBA. I will never buy a gym membership (other than the one I have for indoor bouldering!). I favor walking along the ocean, climbing at my climbing gym, hiking and the occasional mountaineering. Every couple of weeks I do yoga and am amazed that I’m not totally out of yoga shape. I absolutely detest running. I ran two marathons in 2007 and will likely never do that again. Though I will tell you almost anyone can “run” a marathon so if you’re into running and have been thinking about marathon training you should totally do it! Some day I hope to try adult ballet or some other form of dance. (I have two left feet.) For more inspiration on food and body love, see Natalie’s post titled, “My Relationship to Food is the Best it’s been in Years and Here’s Why.” 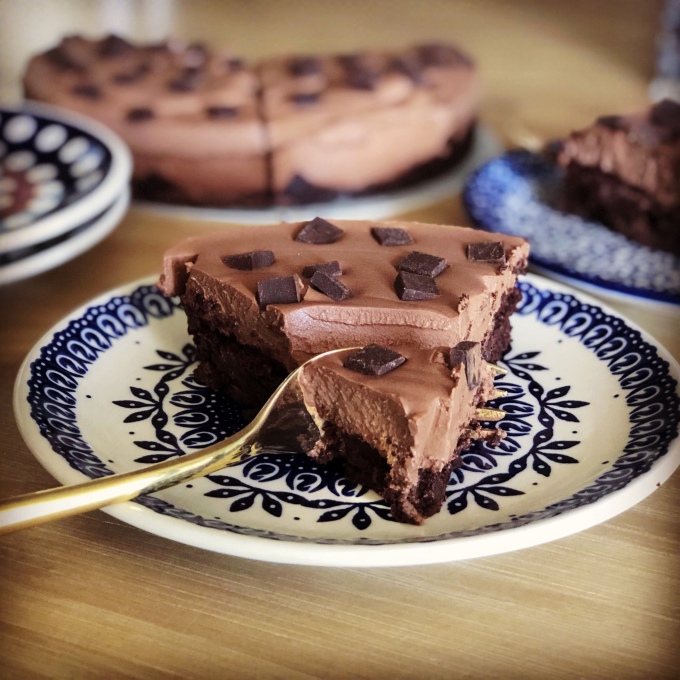 Anyway, my point is, Natalie’s dessert looked so good on IG I didn’t care that it was labeled vegan and paleo, which in some circles is considered healthy. It just looked damn delicious and I wanted it immediately. And I didn’t feel like creating a non-vegan, non-paleo copy-cat. (This is something I’ve done in the past!)

I was suspicious of how this cake would turn out for a few reasons. The first is that I was pretty sure I over-baked the cake part. I used an 8-inch cheesecake pan instead of a 7-inch spring form pan and decreased the baking time by 5 minutes. Also I baked it in my countertop convection/toaster oven and knocked it down to 325 degrees because my convection oven seems to heat things faster. Second, I was not convinced that mixing melted vegan chocolate and full fat coconut milk would produce mousse. In the dairy world, this would make ganache. But sure enough, a mousse it did make. Lastly I was worried the cake would taste too coconut-y because I did not use my favorite brand of coconut milk (Faraon). I didn’t realize I still had a can in my cupboard and went out (i.e. went online) and bought a random brand I had never tried before.

OK, so the verdict is, I loved this dessert. It definitely did not taste vegan or gluten free. I don’t think I would have picked it out of a crowd as vegan or gluten free if I were doing a taste test of chocolate desserts. I could taste a bit of the coconut flavor in the mousse so I would like to make this cake again with Faraon brand coconut milk. I’d also like a thicker cake, which is more like a dense brownie-cake. Because I used a bigger pan my cake portion was not as high. I think multiplying the cake ingredients by 1 ½ will do the trick. All in all, very good for my first try and will definitely be making again! 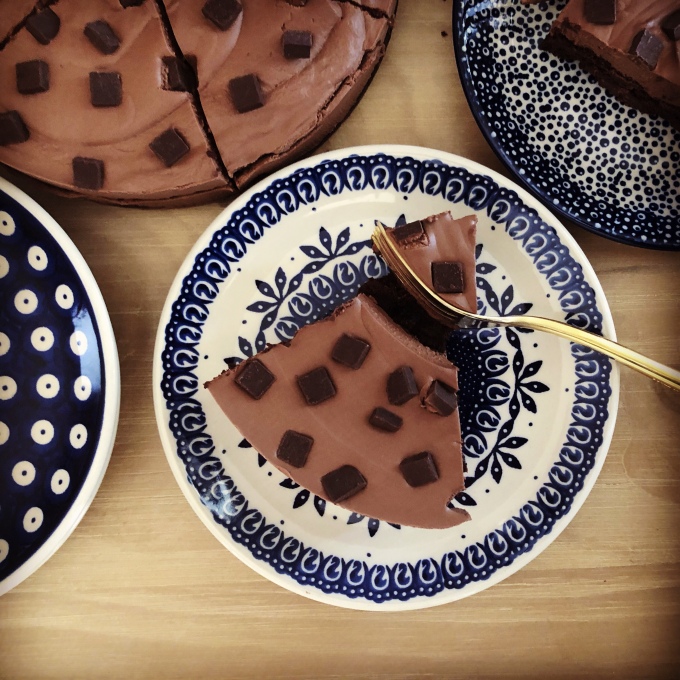 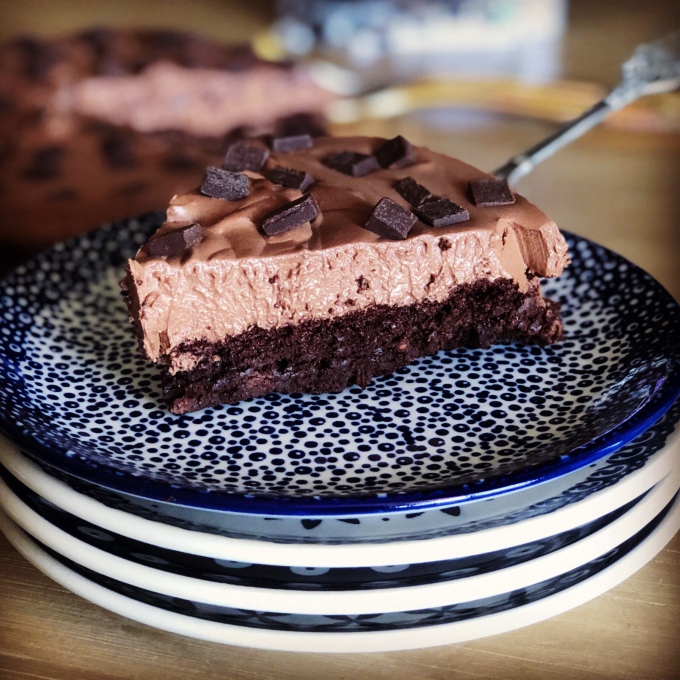