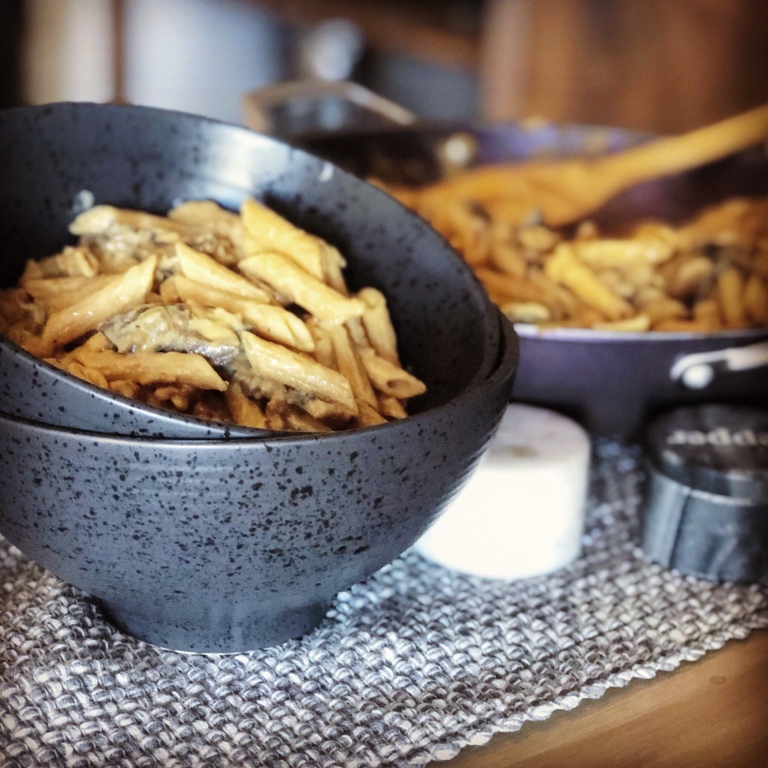 Ever since having been introduced to plant-based ‘burgers’ at restaurants across the country and finding ground Beyond Meat sold at a Winco in Portland, Ore., I decided I wanted to try to recreate beef recipes using a plant-based ‘beef’ and see if I could tell any difference. Ground beef stroganoff seemed like a good place to start. My original intent was to swap ground Beyond Meat 1:1 in a typical ground beef stroganoff recipe, but when I went to my local Winco, they didn’t have any ground Beyond Meat and the two patties I purchased were so expensive, I decided to use half the amount of “meat” in the recipe.

Since my original plans were thwarted, I decided to find an entirely vegan stroganoff recipe instead. Most vegan recipes I found were made with mushrooms only, which obviously makes sense. They mostly involved some sort of cashew cream sauce. Some involved nutritional yeast, some didn’t. So I kind of cobbled together a recipe based on several vegan stroganoff recipes I reviewed. My recipe is most closely loosely adapted from the recipe at Connoisseurus Veg which is a mushroom stroganoff recipe.

I understand that Beyond Meat and the Impossible Burger are polarizing for some vegan folks because the ‘meat’ is just too similar to actual beef. If you don’t like or don’t want to use plant-based “meat,” you can still follow this recipe. Simply substitute with an equal amount of additional sliced mushrooms. Because this recipe was all together healthy, I opted not to use traditional stroganoff noodles (egg noodles) and instead bought some whole wheat penne.

The recipe was a bit experimental since I was cobbling it together as I was going, but the amounts listed below are the final amounts used. (I kept adding Tamari at the end.) I had Umami seasoning (from Trader Joe’s) on hand, which is why I added it. I figured Umami flavoring would be the perfect addition. If you don’t have any Umami seasoning, feel free to leave it out. Though this recipe is basically nothing like the classic stroganoff I’m used to (because it’s vegan), I was impressed by the end results. I liked the plant-based meat addition to the recipe but I also think it would be totally great without. I honestly feel like if you were serving this to anyone and didn’t tell them it was vegan they wouldn’t even know. And my dad liked it too!

Road to a Healthier Life