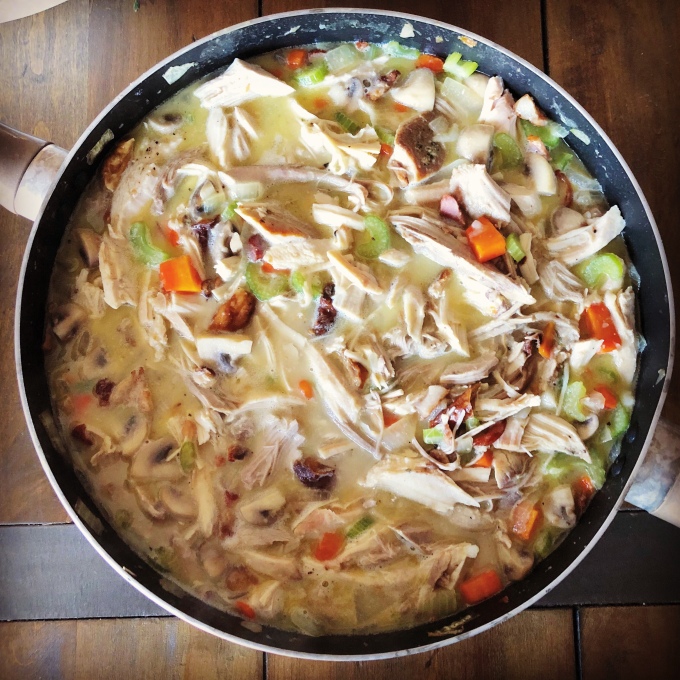 In preparation for the day after Thanksgiving leftover buffet and because my sister has about two pounds of leftover frozen turkey meat in the freezer that we need to use, I decided to find a recipe using turkey leftovers appropriate for any occasion. A friend of mine once told me that her dad makes Thanksgiving Day Soup every year. Apparently he chucks all sorts of commonplace Thanksgiving ingredients — even stuffing — into the soup and it tastes different from year-to-year. Ever since she told me about her dad’s Thanksgiving Day Soup two years ago, I wanted to try the legendary dish. Sadly I did not get any Thanksgiving Day Soup that year. And now we are no longer friends. C’est la vie.

A quick internet search produced a viable recipe for my own version of Thanksgiving Day Soup. Though I didn’t find a soup recipe calling for turkey and stuffing, I did find a stew recipe by Emeril Lagasse using turkey and mashed potatoes. And besides stew is better than soup any day. Right?

Because this wasn’t the traditional Thanksgiving Day meal (it was just a dry-run), I had to make the mashed potatoes from scratch this morning. My family doesn’t have a specific mashed potato recipe. It goes something like this: wash, peel, and cut the potatoes; boil until soft; mash with a potato masher adding milk and butter until desired consistence. Voila. For your convenience, I included a basic garlic mashed potato recipe. (The same one I followed this morning.) Also, I didn’t have cooked mushrooms, so I had to cook those as well. I cooked the mushrooms right alongside the bacon in a flat square pan. I used the reserved bacon grease mixed with some butter to saute the vegetables. (I don’t like to waste bacon grease because it’s a pain to dispose of.)

Even though my sister had all ingredients in her house except for celery and mushrooms, I still managed to pay $8 for those two items. One may ask how I paid so much. The answer is simple. My sister’s dog.

My sister’s dog, Desi, is a sweet looking beagle-mutt who my sis rescued from certain death through adoption. She’s had her going on five years now. We are convinced that something bad happened in Desi’s first dog/owner life. My sis thinks she was taken for a ride in the country and abandoned. Whenever you’re about to leave her alone in the house, she shakes like she’s scared. If you take her for a walk and tie her to a poll for a millisecond, she barks the minute you walk away and will continue barking until you return.

Knowing this, I ran into New Seasons on Hawthorne for just two minutes. Two minutes were all it took for me to sprint across the store to the vegetable aisle and grab the celery and mushrooms. Mistakenly, I thought sign for mushrooms read $1.99. When I was walking home (sans grocery bag — not sure why they didn’t give me a grocery bag??) I happened to flip the mushroom container over as I was trying to juggle the celery, mushrooms, and my purse while simultaneously picking up Desi’s poop; and I happened to notice the organic mushrooms actually cost me $4.99. Thank God I bought organic mushrooms!

Note: This stew would also be great on its own — maybe accompanied by some crusty French bread for dipping.