Have you ever asked someone if they’ve ever had hamburger stroganoff and gotten a blank look? Like they had absolutely no idea what “stroganoff” is? That happened to me once and I thought it was weird. I thought everyone grew up eating stroganoff on a regular basis. My mom made this classic dish my entire life. (Though I didn’t start eating it until my teens or 20s, however. As a child I ate very plain food and avoided vegetables such as mushrooms.) But in this person’s defense, he was born in another country (though grew up in the States since a young age). He may have grown up eating the old country’s food instead of classic American cuisine such as stroganoff.

The only stroganoff I ever encountered growing up was of the hamburger variety but found recently that there are many different types of stroganoff. Chicken, meatball, lamb, steak, etc. It’s like you can use any kind of meat in place of hamburger. I once made lamb-burger stroganoff–this was way before Pinterest revolutionized the sharing of recipes. I thought I was pretty clever for coming up with a spin on the classic hamburger recipe (and name)! I’ve also made ground turkey, browned butter hamburger and Italian sausage stroganoff. See? You really can make stroganoff using any meat!

Recently I found a recipe my grandma sent me for crockpot chicken stroganoff, which seemed like something I wanted to try. One, because I had most the ingredients already on hand. And two because crockpot cooking is so easy. And three because I need something to take to work for lunch and any recipe that yields a large amount will feed me for a week. Or more!

In a nutshell, stroganoff is comfort food–for those of you who’ve never had it. It’s a creamy noodle casserole often made with processed crap like condensed soup. I am not overly fond of recipes that use canned foods versus fresh and, actually, once made my own “condensed soup substitute” for stroganoff; however, I do think there is definitely a time and a place for canned goods and processed foods. Specifically for classic foods from my childhood days.

My recipe below is an adaptation of the one my grandma sent to me. I cannot actually find a link to the recipe like I usually can but I suspect she clipped it from the Milwaukee Journal-Sentinel. 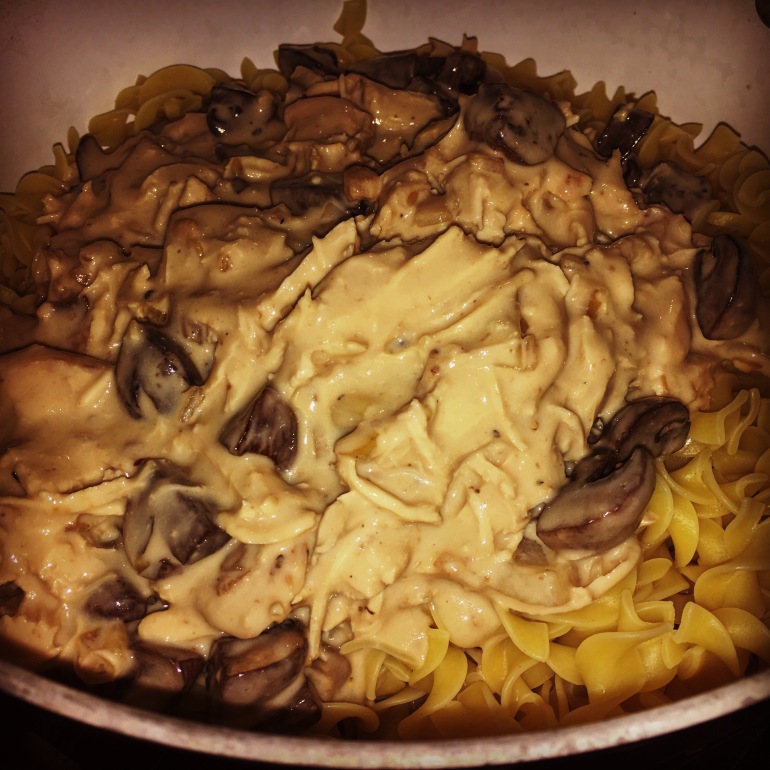 So this recipe was good, but I wasn’t overly psyched at first. It didn’t remind me all that much of the hamburger stroganoff I grew to love. I had a few bites, took some pics and packaged up the rest for lunch. Honestly I was a bit overwhelmed by the amount of leftovers I had in my fridge. Later on I was sitting down to write this blog and I thought … eh … I’m still hungry. So I got the smallest container I had packaged from the fridge, and it was actually still warm. So I dove in. And remembered how much better stroganoff is after it sits for a bit and even cools down slightly. It gets thicker. And the flavors seem to meld. And then I was suddenly very satisfied with my choice and the recipe. 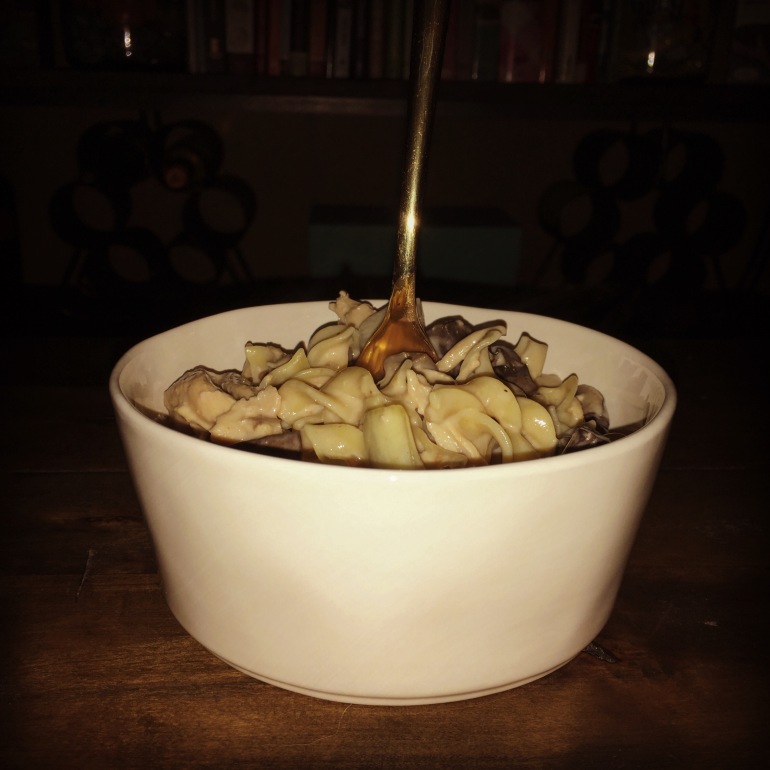 I was also stoked because I had some leftover chicken in sauce and my mind began drifting as to how I could use it. I figured I could make some biscuits and turn the leftovers into something like chicken and biscuits. Which I did. And it was even better with biscuits!