The other night we had another refrigerator scare and I began pulling half thawed items out of our freezer. One of those items was a package of two boneless, skinless chicken breasts. Since I had a brick of white cheddar in the fridge from my last attempt at mac and cheese, I decided a chicken mac recipe was in order. When researching recipes for this dish, I had in mind Zach’s Three Cheese Chicken Mac (I found this almost recipe as I was writing this post; after I had already made my chicken mac dish. Guess I’ll have to try this recipe another time!) from The Chancery. When I was a bartender there, it was one of my favorite meals.

This was what I thought the perfect recipe would be:

Below are the ingredients actually used in the dish I served my father for dinner at 10 p.m. tonight:

Now, I know what you’re thinking after you read what I put into my dish. That’s a lot of cheese! Admittedly, it is a lot of cheese. (And what’s my food mantra? There’s no such thing as too much butter or cheese.) Everyone knows I love cheese, but you should know I did not intend to put that much cheese into the dish. I needed to!

I set out to follow the first recipe, and everything was coming along swimmingly until I reached the point where I was to add the milk. As you can see, I ran out of milk. No bother, I thought. So the cheese sauce will come out a bit thicker. No big deal.

Unfortunately after I had added the cheese to the pot, I deemed the sauce too thick. Having nothing but vanilla flavored soy milk in the fridge, I decided to add half a cup. Before I did so, I asked my dad if he thought you’d be able to taste the vanilla. He replied, Probably not with all that cheese.

Well, he was wrong. After I added the soy milk, I tasted the sauce and could very distinctly taste sweet vanilla. With my dad’s words in mind, I began dumping extra cheese into the dish to counteract the vanilla taste. First I added approximately one cup of mild cheddar cheese. The mild cheddar cheese did not do the trick. That’s when I decided to add American cheese. (Not only was the sauce too sweet, I also thought it needed to be creamier. The cheddar cheese had made the sauce too grainy for my taste.) Well before I knew it, I had added nine slices of American cheese and the remaining hunk of Velveeta that was in the fridge. (I was trying desperately to get a smooth, creamy sauce. By the end it was almost creamy enough for me.)

In remaking this dish in 2019, I hit the jackpot with the random tweaking I did to the original recipe I created by cutting down from four different cheeses to two and using precooked, breaded chicken instead of grilled, baked or poached. My dad, who was lucky enough to be here to try the updated version of this recipe, crowned the dish restaurant-worthy. 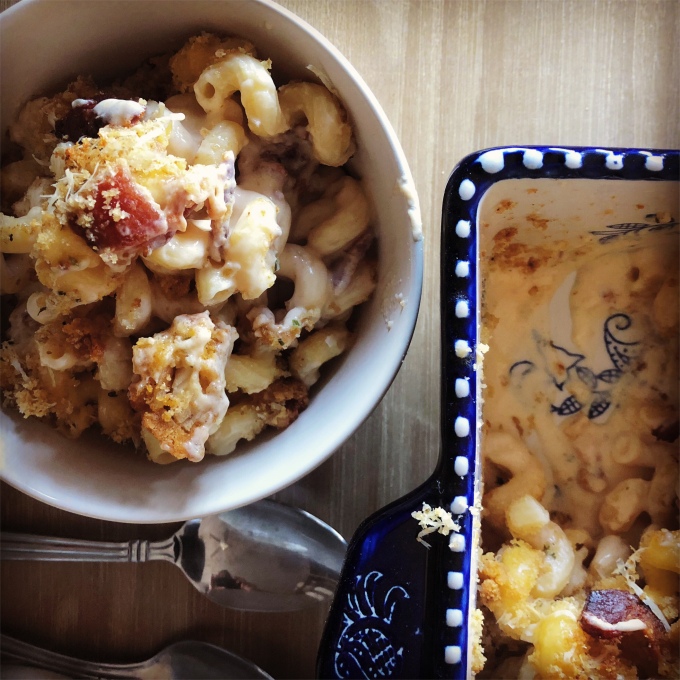 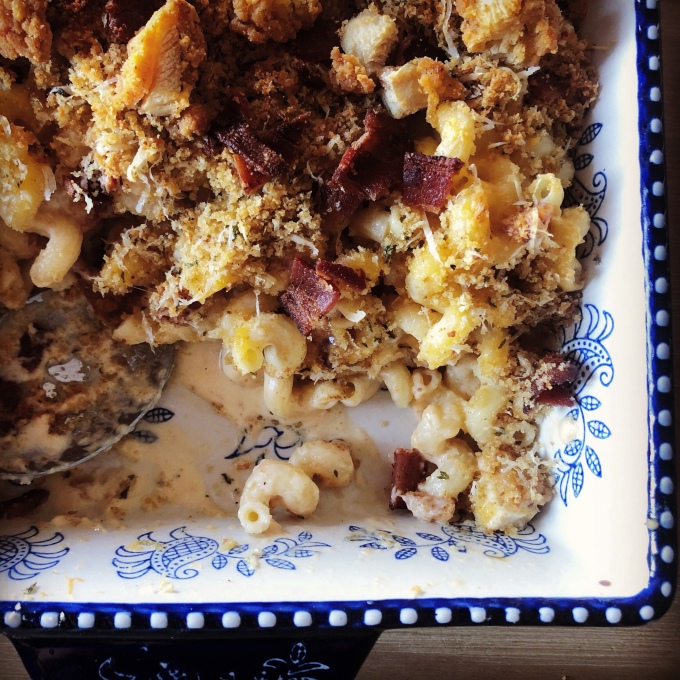