In making this particular pie I may have figured out why there are no recipes for this on the internet. I took a recipe I have for butterscotch cream pie and swapped butterscotch chips for peanut butter. In doing so I took away the ‘cream’ consistency as the peanut butter made the mixture rubbery.

I was frightened by the rubbery texture but not deterred from getting a real cream pie. So I continued on with the recipe by adding the butter, the next step. This made the consistency even worse. The peanut butter mass broke down in the sea of butter into tiny pieces of rubbery peanut butter. I stirred and stirred hoping that creaminess would return but instead I stirred some butter right out of the pot.

Still I persevered. I added a little more whipping cream and four more egg yolks and continued stirring. Magically, the pudding sort of just came back together at that point in a mostly creamy maybe slightly rubbery mass.

I gave it a day to set before garnishing it with Peanut Butter Whipped Cream and peanut butter crumble. When I was done, it basically looked like a masterpiece. So good I almost didn’t want to cut into it. Almost.

Cut into it I did. I cut myself a huge piece (accidentally, of course) that was probably equal to two normal pieces of pie or three thin slices. And then I dug in. Between the peanut butter crust, peanut butter crumble, peanut butter filling and peanut butter whipped cream, it was a peanut butter explosion. The texture of the cake was a cross between a cream pie and a caramel-like or fudgy sort of texture. A little sticker, perhaps than a cream pie, but good nonetheless. I ate less than half of the huge piece of pie and had to stop.

What? When does that happen?! When do I ever not finish dessert? Rarely, if ever, do I not finish dessert when put in front of me – unless it sucks, of course. This pie was so rich I physically made myself ill eating half of the piece (so … eating a normal size piece of pie). I literally felt like I wanted to throw up. That probably doesn’t sound like a great reaction when eating food, but trust me – in this case it is! 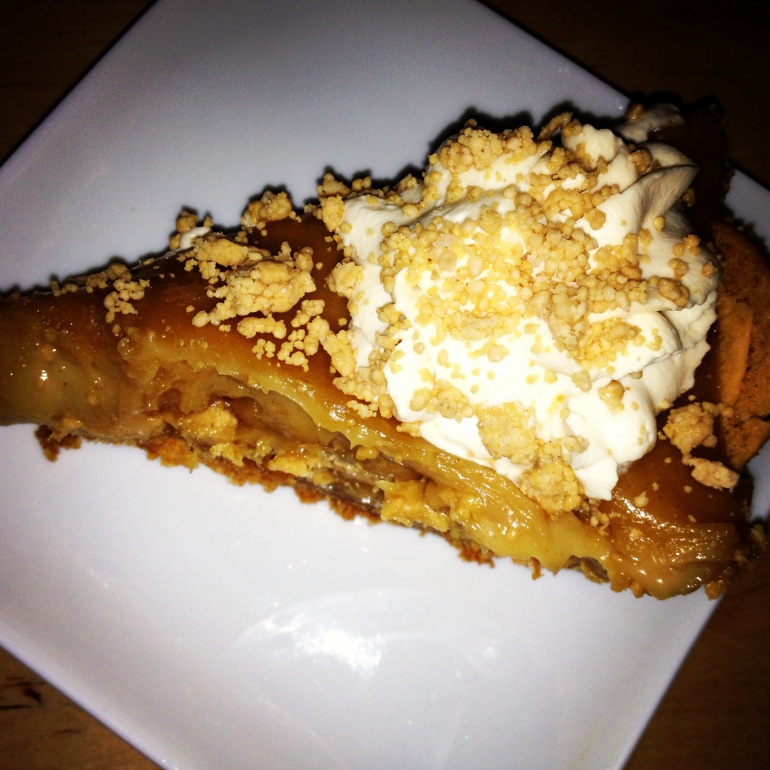